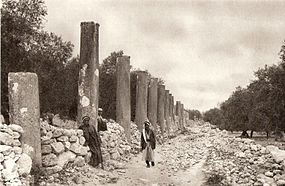 Everyone who has completely read the Bible realizes that the United States of America is not mentioned by that name. While some recognize the link between the house of Joseph and his son Manasseh to the USA, is there any other name used prophetically in the Bible? The area of Samaria was the capital of the ‘lost ten tribes of Israel.’ Does the Bible connect Samaria to Ephraim or Manasseh? Is there any connection between the USA and Samaria. What do the Old and New Testaments teach about Samaria and Samaritans? Does the USA have any physical or spiritual characteristics similar with Samaria? The Assyrians took over Samaria by 718 B.C. and the Louisiana Purchase was 2520 years later–is this related to anything? Bible tells of a future takeover of Samaria by the King of Assyria–could this be a prophecy about the USA? Will the ‘fat’ become subject to famine and slavery? Will the King of the North of Daniel 11 takeover the USA? Dr. Thiel addresses these questions and more.

Here is a link to the sermon: USA in Prophecy: Samaria.