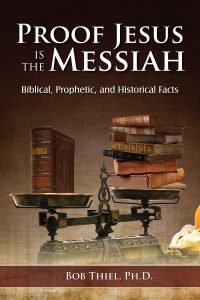 Proof Jesus is the Messiah

Can you prove that Jesus is the Messiah?

Was the time Jesus arrived prophecied?

Does prophecy provide clear proof of Jesus being the Messiah? Is there historical evidence of Jesus?

Does it make sense to believe in Jesus?

Why don’t most Jews accept Jesus?

Was Jesus of the New Testament the prophesied Messiah?

Is there evidential proof, either way, about this?

And the hope is that the reader will properly review the evidence before making a conclusion that he or she will not be willing to change.

Now, some of you have already reviewed the evidence and already made your decision. That can be fine, and in many cases, quite good.

But even if you have looked over some of the evidence, it is hoped that this book will help you have more information so that you will not only be able to personally be helped, but also have a better ability to help others who might struggle with living a life of Christian faith.

Furthermore, according to even certain Jewish interpretations of Hebrew scriptures (Hosea 6:2, Daniel 9:24-26, Jesus came when the Messiah was prophesied to come (details are in chapters 3).

Here is a link to our draft book: Proof Jesus is the Messiah