The Feast of Trumpets is this Sabbath.

Nine days later, the Day of Atonement is be observed from sunset the 27th through sunset the 28th of September. 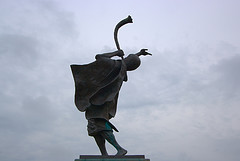 Most of the Greco-Roman churches do not keep the biblical holy days that generally occur in the Fall. Yet, these Holy Days portray many pivotal events in God’s plan.

The Feast of Trumpets not only pictures the coming of Christ to resurrect the firstfruits from the dead, it also pictures the terrible time of devastation just ahead and the intervention of Jesus Christ to save the living from total annihilation and to establish the Kingdom of God on earth.

The fourth Holy Day, the Feast of Trumpets, is observed in “the seventh month, on the first day of the month” (Leviticus 23:23-25).

The number seven in God’s plan signifies completion and perfection. The seventh month of God’s calendar (occurs in September and/or October) contains the final four festivals, picturing the completion of God’s great master plan for us. The festival that falls on the first day of this month marks the beginning of the final events in God’s plan.

It is another annual Sabbath of rest from one’s regular work, and it was to be a memorial of blowing of trumpets (Leviticus 23:24-25). It is also a time to learn God’s ways (Nehemiah 8:2-3; cf. Ezra 3:1-7). Much of what happened to the children of Israel was written for our “examples, and they were written for our admonition, upon whom the ends of the ages have come” (1 Corinthians 10:11).

It is from the blowing of trumpets that the Feast of Trumpets draws its name.

There is a great deal of symbolic meaning tied in with the blowing of these trumpets, especially with regard to the end times in which we’re living. It should be noted that the modern Jewish name for this date, Rosh Hashanah, is not biblical nor even original for the Jews. It was something that they adopted centuries after God gave it to them and after the Old Testament was written (Kramer, Amy J. Rosh Hashana Origins. Copyright © 1998-1999 Everything Jewish, Inc.).

The Bible teaches that Trumpets were blown to announce God’s feasts, as well as to call people to assemble (Numbers 10:1-3, 10).

Interestingly, Jewish scholars have tied the Feast of Trumpets in with the ‘Book of Life’ (Peltz M, Rabbi. What is in a Rosh Hashanah greeting? Haaretz, September 17, 2012). Why is that of interest?

The Book of Revelation clearly teaches that seven trumpets will be blown (8:2), punishment comes upon those who are not protected by God (9:4), and then God’s kingdom and judgment will come (11:15-18). Finally it teaches that those whose names are not written in the Book of Life will experience the second death (Revelation 20:14-15).

Consider that the Bible shows that during Israel’s history, which was heavily punctuated with conflicts and rebellion, trumpets continued to be used as warning devices, to call to arms or as preludes to important messages — always to mark an event of tremendous import to the whole nation.

God also used the prophets, among them Isaiah, Ezekiel, Hosea and Joel, to warn Israel about punishments He would bring upon them for their constant rebellion against His laws. These prophets were to use their voices like trumpets to blare their warnings to God’s people.

1 Cry aloud, spare not; Lift up your voice like a trumpet; Tell My people their transgression, And the house of Jacob their sins. (Isaiah 58:1)

We in the Continuing Church of God are working to do that today (e.g. see Cuties: Child pornography). We boldly tell of the sins of society and how world events are aligning with properly understood prophecy–which we also strive to explain.

But there will also be literal trumpet blasts coming in the future as the Book of Revelation teaches (Revelation 8:1-13, 9:1-18).  But most will not heed those warnings.

Many are blown in the Book of Revelation, and a lot were to be blown on the Feast of Trumpets (Leviticus 23:24)–hopefully many can see the connection.

But the most important trumpet, in a sense, could be the last, the seventh one. Here is what Revelation teaches about that:

15 Then the seventh angel sounded: And there were loud voices in heaven, saying, “The kingdoms of this world have become the kingdoms of our Lord and of His Christ, and He shall reign forever and ever!” 16 And the twenty-four elders who sat before God on their thrones fell on their faces and worshiped God, 17 saying: “We give You thanks, O Lord God Almighty, The One who is and who was and who is to come, Because You have taken Your great power and reigned. 18 The nations were angry, and Your wrath has come, And the time of the dead, that they should be judged, And that You should reward Your servants the prophets and the saints, And those who fear Your name, small and great, And should destroy those who destroy the earth.” 19 Then the temple of God was opened in heaven, and the ark of His covenant was seen in His temple. And there were lightnings, noises, thunderings, an earthquake, and great hail. (Revelation 11:15-19)

The Feast of Trumpets pictures the future blowing of trumpets and the reality that Jesus will come and establish the Kingdom of God on the earth. The good news of coming Kingdom of God is a big part of what Jesus wants His servants to proclaim now (Matthew 24:14; 28:19-20), and then the end will come (Matthew 24:14). The Feast of Trumpets points to Christ’s victory over this world.

Greco-Roman historians, such as Jerome and Epiphanius (Catholica Omnia Tabulinum De Ecclesiae Patribus Doctoribusque Materia Migne JP Argumentum Patrologia Latina Volumen MPL025 Ab Columna ad Culumnam 1415 – 1542A, pp. 922, 930 and Epiphanius (Ephiphanius. The Panarion of Ephiphanius of Salamis: Book II (sects 1-46) Section 1, Chapter 19, 7-9. Frank Williams, editor. Publisher BRILL, 1987, p. 117-119), recorded that the ‘Nazarene Christians’ continued to keep the Fall Holy Days into the fourth and fifth centuries. They were also kept by the faithful Christians in Jerusalem who claimed the original Christian building in Jerusalem into the fourth century until they were stopped by Imperial authorities (Pixner B. Church of the Apostles Found on Mt. Zion. Biblical Archaeology Review, May/June 1990: 16-35,60).

The anti-Semite John Chrysostom specifically attempted to stop people from keeping the Feast of Trumpets in the late fourth century (John Chrysostom. Homily I Against the Jews I:5;VI:5;VII:2). However, those trying to be faithful continued to do so throughout history.

The Continuing Church of God continues to do so now.

We produced DVDs for Feast of Tabernacles’ sites that are not expected to have reliable internet connections or sufficient live speakers. We sent these via Priority Mail and/or Federal Express to the Philippines, Ethiopia, Kenya, Malawi, Ghana, and Kenya. We hope that a set will get to Mozambique from Malawi or Kenya.

They are also being sent with the view that some may be able to translated them into their local languages. They include sermons covering the entire Book of Deuteronomy which is something that should be covered at ALL CCOG Feast of Tabernacles’ Sites in 2020.

The Gospel of the Kingdom to the World as a Witness

Pastor Samuel Ofosu Gyeabour sent told us that our English language booklet, The Gospel of the Kingdom of God, has been published in the language of Asante Twi in Ghana.

Here is a picture of the front cover: 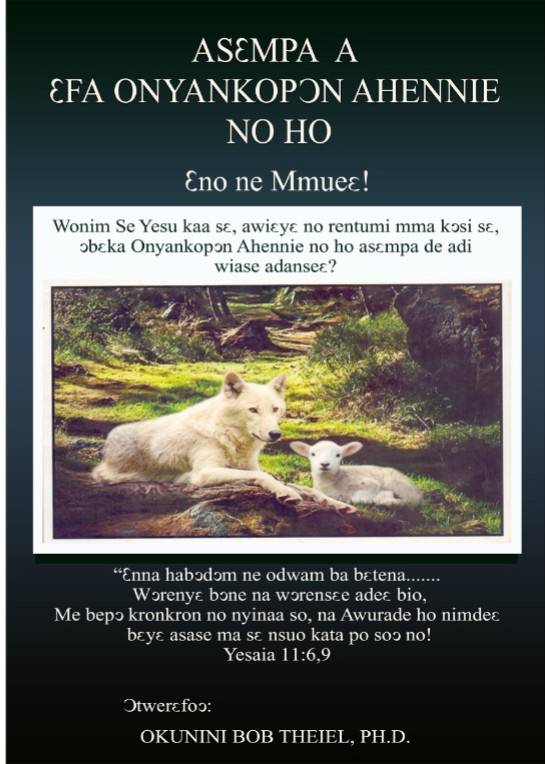 With our booklet The Gospel of the Kingdom of God translated and available in over 100 languages now, we are working to fulfill this commission.

On a local note, smoke from the fires has been dying down in the Grover Beach area, yet California still has fire problems and the Gulf Coast of the USA has been facing flooding (see USA: Hurricane Sally at Gulf Coast and Fires Burning the West Coast).

Over in Europe, there is a furor over UK Prime Minister Boris Johnson’s decision to have a type of backup plan related to Brexit that some have claimed is ‘illegal’ (see ‘Germany: Britain will hurt most if post-Brexit talks fail’). The Europeans will not forgive the UK for its departure from the EU, and this is one more piece that has upset the Europeans. Ultimately, this will not turn out well for the UK (cf. Daniel 8:24-25; Isaiah 17:3a).

Pope Francis reportedly signed off a deal with China to get more official recognition for the Roman Church, which has upset some who consider themselves faithful to the Church of Rome (see ‘Special Report: Vatican China Sellout’). This move is consistent with the Vatican’s global agenda–something that scripture warns about (cf. Revelation 17:1-2).

For those wishing a second service for the Feast of Trumpets, here is another possibility:

The next annual holy day will be the Day of Atonement, which begins at sunset on September 27th this year.

51 Behold, I tell you a mystery: We shall not all sleep, but we shall all be changed —  52 in a moment, in the twinkling of an eye, at the last trumpet. For the trumpet will sound, and the dead will be raised incorruptible, and we shall be changed. 53 For this corruptible must put on incorruption, and this mortal must put on immortality. (1 Corinthians 15:51-53)

Brethren, we look forward to that time. A time that the Feast of Trumpets helps picture.