Last Sabbath, we were in Serbia for the first time ever and held services in our hotel room. Services went well despite attempted recording difficulties. The brethren were warm and friendly, and we answered various questions that they had.

Six of the ten in Serbia who are part of the Continuing Church of God were able to come. This was the first time we had met any of the Serbian brethren personally. 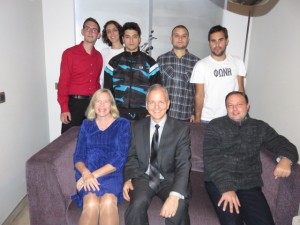 Sasha stated that the word on the T-shirt is the Serbian script for Philadelphia (as in, part of the Philadelphian remnant).

After Serbia, we headed to the Netherlands.

We hope and pray that your Day of Atonement went well.

We spent the Day of Atonement in Amsterdam in the Netherlands and had services in our hotel room with a couple of Dutch CCOG members.

We are planning for services this Sabbath in Amsterdam.

The next day we plan to drive down to Gouda in the Netherlands for first half of the Feast of Tabernacles. The second half we plan to keep in Aurora, Illinois, USA.

Remember, the Feast of Tabernacles begins at sunset, Sunday October 16, 2016.

For those unable to physically attend, as well as those at primarily video sites, here is a link to a message many will see Sunday night: Opening Night Message: 2016 Feast of Tabernacles.

Here is a suggested service for the next day, October 17th:

If possible, we hope to upload sermons given this year during the Feast of Tabernacles. There are, however, technical difficulties that might prevent this. If we are able to upload them, they should be available at the ContinuingCOG channel.

We also have links to sermon messages either made for this year or in past years available towards the end of the article Feast of Tabernacles’ Sites for 2016.

A booklet on the Holy Days is also available: Should You Observe God’s Holy Days or Demonic Holidays?

Yesterday, I came across an article by William Engdahl (Strategic-Culture.org) titled The Eurasian Century Is Now Unstoppable. Based on his personal observations, he claimed that the Eurasians, meaning a confederation involving Russia and China will become the geopolitical center of the world in the 21st century (see ‘The Eurasian Century Is Now Unstoppable’). Yet, the Bible shows that this will be Europe (cf. Revelation 13, 17, 18). As Christians we understand that we must walk by faith and not by sight (2 Corinthians 5:7), hence we realize that the Bible teaches that despite problems, Europe will arise.

Now, both in the USA (‘Ken Rogoff’s Government Debt Default Plan’) and Europe (see ZH: ‘Deutsche Bank Tells Investors Not To Worry About Its €46 Trillion In Derivatives’) there are financial threats looming. Economic matters will be a factor in the rise of the end time European beast power that the Bible foretells (cf. Revelation 17:12-13). Debt issues will help lead to the destruction of the USA (cf. Habakkuk 2:6-8). Eurasian nations will play a role, but for at least 42 months, the world will be dominated by Europe (Revelation 13:5).

In the USA, the second presidential nominee debate between Donald Trump and Hillary Clinton took place. The two currently do not get along and the debate made that clear (see CNN: ‘Trump, Clinton wage scorched-earth debate’).

When I have considered various statements that those two candidates have made in the course of their lives, the following scriptures came to mind:

7 Do not be deceived, God is not mocked; for whatever a man sows, that he will also reap. (Galatians 6:7)

1 But know this, that in the last days perilous times will come: 2 For men will be lovers of themselves, lovers of money, boasters, proud, blasphemers, disobedient to parents, unthankful, unholy, 3 unloving, unforgiving, slanderers, without self-control, brutal, despisers of good, 4 traitors, headstrong, haughty, lovers of pleasure rather than lovers of God, 5 having a form of godliness but denying its power. And from such people turn away! 6 For of this sort are those who creep into households and make captives of gullible women loaded down with sins, led away by various lusts, 7 always learning and never able to come to the knowledge of the truth. (2 Timothy 3:1-7)

The Feast of Tabernacles pictures a culminating event in God’s plan. After Jesus died for our sins to redeem humankind, He sent us the Holy Spirit and picked out a people for His Name to become kings and priests to reign with Him on earth (Revelation 5:10). After His Second Coming, and after He has finally placed all the sins upon the head of Satan separating both him and the sins from the presence of God and His people (making us finally joined at-one with Him, atonement), then we are ready for that final series of events, the commencement of the establishment of the millennial Kingdom of God on earth.

The Feast of Tabernacles pictures the spiritual and material abundance that will occur during the millennial reign of Jesus Christ when people will keep God’s laws without Satan’s deceptions (Revelation 20:1-6). This is in contrast to what is happening now in a world deceived by Satan (Revelation 12:9). Satanic deception, which will be gone then (Revelation 20:1-3), is part of why most who profess Christianity have been misled by ‘nice’ false ministers as well as why many of those ministers have been misled (2 Corinthians 11:14-15).

Jesus himself, kept the Feast of Tabernacles, and also taught it per John 7:10-26.

Here are some instructions about it from the Hebrew scriptures:

33 Then the Lord spoke to Moses, saying, 34 “Speak to the children of Israel, saying: ‘The fifteenth day of this seventh month shall be the Feast of Tabernacles for seven days to the Lord. 35 On the first day there shall be a holy convocation. You shall do no customary work on it.

13 “You shall observe the Feast of Tabernacles seven days, … 14 And you shall rejoice in your feast, you and your son and your daughter, your male servant and your female servant and the Levite, the stranger and the fatherless and the widow, who are within your gates. 15 Seven days you shall keep a sacred feast to the Lord your God in the place which the Lord chooses, because the Lord your God will bless you in all your produce and in all the work of your hands, so that you surely rejoice.

God had ancient Israel dwell in booths/tabernacles (‘sukkos’ in Hebrew) in the wilderness for decades before they entered the promised land. Those booths, in a sense, pictured that they were only heirs to the promised land. Even during the Millennium, when the Kingdom of God is ruling over mortal nations, the mortal people will be only heirs to the Kingdom. They must overcome and grow in knowledge and wisdom to inherit the promises.

God says of Ephraim (sometimes portraying a type of all Israel in scripture) that they will “dwell in tabernacles, as in the days of the feast” (Hosea 12:9, Douay-Rheims). Israel, in the wilderness, was a type of all people who must go through trials and tribulations to inherit the promises (1 Corinthians 10:11). They were sojourners, waiting to inherit the promises of God.

We Christians are to realize that we have no permanent city in this age and look to the one to come (Hebrews 13:14). The staying in temporary dwellings during the Feast of Tabernacles helps remind us of that. Christians should attend church services, if possible, each day of the Feast of Tabernacles to learn (Deuteronomy 31:10-13; Nehemiah 8:17-18) being living sacrifices, which is our “reasonable service” (Romans 12:1).