This week’s sermonette and sermon are different lengths than usual.

In the old Worldwide Church of God, they would sometimes have what they called a split sermon, with each man speaking 40-50 minutes. Since I wanted more time that usual for the sermonette, I thought I would make the sermon shorter (I covered chapters 4-6 of Ecclesiastes, and since I had a lot of materials for chapter 7, it seemed to make sense to stop after chapter 6, otherwise it would have been long).

Anyway,  the sermonette topic was not really enough for a sermon, plus I wanted the historical references to be shown and decided having it produced like our normal sermonettes would be better should people outside the Church of God watch it.

Before the Feast of Tabernacles, Steve Dupuie sent the following announcement:

Greetings Noble Brethren –
I would like to put together a slide show for all to enjoy covering our upcoming Feast of Tabernacles.
I want to extend an invitation to all our brethren all across the globe to contribute to the success of the slide show.  Just take pictures of whatever your heart desires.
I think it was two years ago that Evangelist Ochieng sent several videos, one of which featured Rose singing a solo.  This video brought tears to the eyes of at least one of us in the USA.  The point is this: in addition to still photos, you can include videos of singing, special music, sermons, special events, etc.  I can include small portions of the videos into the slide show.  It seems to be a real hit.  By the way.  It doesn’t matter what your native tongue is.  It all seems to be spoken in the language of love, so we can all understand.
I would like all the brethren around the world in India, Africa, Europe, North America, Haiti, and the South Pacific to know that this invitation includes you!  The rest of us around the world are very excited to meet you.
Email your photos to: steve.dupuie@yahoo.com.  The names and event of the photo is vital.  Here is how the camera names a photo – Xm43dji883.jpg.  Here is how Shirley renames the photo – Charissa, Julie & Fai at the Aviation Museum, Tauranga, NZ.jpg.  I really like the way Shirley names a photo.  This is accomplished by right clicking on the photo and then clicking “Rename”.
Either way – take photos and send them to me – Please.
If you have videos they will have to be sent by a different computer method.  Let me know if you have videos and we’ll work it out.  Just take the videos.
Happy Feast!
Steve –

While he has received photographs from many of the festival sites for 2019, he does not seem to have photographs from all of them. I spoke to him about this project last week, and he is hoping to get it out this month or next at the latest.

So, even if you were at a video site or some other site that we have not seen photos from, consider sending him photographs. His email address is steve.dupuie@yahoo.com

I greet you in the name of Jesus Christ who is our savior and that we expecting him to return and rule with the saints. The Brethren are doing well and that the word of the Lord is going on well here. We are now in a long holiday of two months given that the schools have been closed and that there are many youths now at home. We were therefore kindly requesting for the support of the youth meeting in the group of Chilani

Ever since you started supporting the youth meeting, the youths have started to have a thorough understanding on the Biblical doctrines and that they have grown spiritually as the scripture is saying teach the child when still young. The youths have gone astray following the ways of these world but it is only the church where one can find youths who are still obedient(Proverbs 22:6, Titus 3:1).

Another thing is that for the past one year the women of Chilani have form a group known as “the light of Christ (Messiah)” and that they have made some collections with the aim of assisting the widows, Orphans and other needy people. However, the group is facing financial constraints and that they had asked me to tell Evangelist Ochieng so this group may get assistance so that they may discharge their duties effectively.

Recently this group has visited a 98 year old woman who had received God’s ministers in the late 1970s. Her husband has died long time ago, the church assisted her with beddings, milk and other necessities. We will send you photos and the children you will see are her great grandchildren. This event has changed the soul of the villagers. We were to assemble at Kapolecho Local Church tomorrow but due to the heavy rain we are experiencing it will not be place due to the fact that the church has not been constructed. But there is a plot for construction. Evangelist Ochieng has agreed that the church will be supported in the near future. We shall not forget to thank the Continuing Church of God ever since we joined each other with Evangelist Ochieng. The brethren of Bomet have also invited me to go and teach them the doctrines of the church for there are new Brethren who have joined the church.

We are thankful because they are now able to shelter from rain and sunshine. Let’s continue praying for each other. 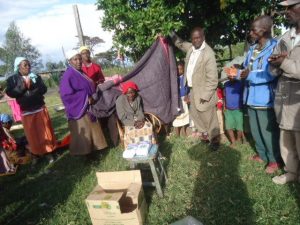 The photo above shows the type of bedding/mattresses we have provided to parts of Africa when we have been able to do so.

Receive greetings in the name of  Jesus Christ . We are going on well here at South Rift, Kenya. I am travelling to Bomet from tomorrow a place called Kiromwok (a place we had assisted them with Iron sheets with Evangelist Ochieng the other time). There are some Brethrens who the joined the brotherhood and i will be with them until sabbath. Later, i will go to a place called Chebirbelek to meet with Our brothers and sisters who have called me. Then I will proceed to Bureti not far from Kericho. In all those places, i have been Called by them. Need your prayers so that I complete the journey well. I have informed Evengelist Ochieng about my journey. God bless you .

US President Trump is under a more official impeachment inquiry than the behind the scenes one that had been going on (see Trump inquisition changing with House impeachment rule vote). This has been the most partisan impeachment investigation we have seen in the USA in my lifetime. The USA is getting more and more divided–this will not end well (cf. Matthew 12:25).

Last Friday, the Vatican announced yet another holiday for its version of Mary (see Pope Francis authorizes yet another Marian holiday: A Black Madonna connection to his interfaith environmental agenda?). Pope Francis authorized another new Marian holiday last year. It is likely that some of the signs and lying wonders prophesied by the Apostle Paul (2 Thessalonians 2:9-10 will be associated with ‘Mary.’

In India, a million gas masks were given out because of air pollution there (see Air pollution causes India to give out millions of gas masks; Heads of India and Germany sign trade agreements). On Monday, the USA officially informed the United Nations that it is pulling out of the climate accords agreed to in Paris by then US President Obama–the Europeans are not pleased with this (see AP: EU hopes US will rethink choice to pull out of climate pact).

The Europeans, as well as some in Asia, are also displeased with aspects of US trade policy and are hoping to work with China to essentially bypass the US (see Asean leaders move farther from US, as EU is also looking towards China). One day, relatively soon, more of the world will look towards Europe as the dominator of world trade instead of the US (cf. Revelation 17-18).

The Apostle John recorded the following:

34 Jesus said to them, “My food is to do the will of Him who sent Me, and to finish His work. 35 Do you not say, ‘There are still four months and then comes the harvest’? Behold, I say to you, lift up your eyes and look at the fields, for they are already white for harvest! 36 And he who reaps receives wages, and gathers fruit for eternal life, that both he who sows and he who reaps may rejoice together. 37 For in this the saying is true: ‘One sows and another reaps.’ 38 I sent you to reap that for which you have not labored; others have labored, and you have entered into their labors.” (John 4:33-38)