One project we have been working on is taking steps that we hope will lead to more exposure over radio.  We plan to give more updates on this aspect of the work as they become available.

Just received the April 2015 results of our Google campaign for preaching the truth about early Church history and the location of the true Christian Church today.

According to Google, our message made 2,797,634 impressions for the month of April 2015.  We are reaching millions of computers with information about the truth. We ordered copies of Où est la vraie Église Chrétienne aujourd’hui? to be printed today and expect to have them later this month.

The English version of this same booklet is titled: Where is the True Christian Church Today?

Both the French and German editions were translated by CCOG volunteers in Canada , and the Spanish edition by a volunteer in South America.

We want to reach people in all tongues that we can (cf. Revelation 7:9), and are grateful for all the work that our volunteer translators do around the world.

Received the following report a couple of days ago:

We greet you in Jesus name of Messiah. We are well and going on with the spreading of goods news.

We met with Pastor Ochieng at Kilgoris tagitech Trans Mara West, and truly we appreciated the gift of iron sheets which was given to the congregation which they used to worship under the trees and in schools. Very soon they will have a room to worship. Also we appreciated the gifts of foods given to the widows whom they had no food at all. In this congregation they were many widows.

After that, a child who had burn on his body due to the epilepsy was also assisted to be taken to the hospital.

People who was displaced also assisted among them was our brethren who had no houses because they were burn and were forced to go out without anywhere to go. Like me Josea Kipngetich, I am also among them and I am asking for your prayers in order to get where to lives with my family. In the course of that we were blessed with a male child and we are happy because of that.

We are still in need of assistance since we are now about to plant but we do not have anywhere to plant and not seeds. We are also planning to do the Feast of Tabernacles at chilani Tran Mara East. Greet all the brethren there.

Here is a photograph we took in New Zealand on Pentecost: 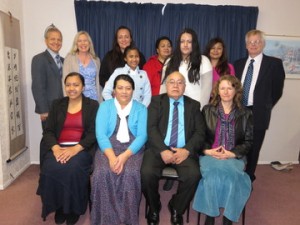 We tried to include that last week, but there was a file sizing problem we were not able to correct until this week.

The recommended sermonette and sermon for this week were recorded in New Zealand.

Speaking of New Zealand, the people there were excited about the sermon given there on the ‘short work’ of Romans 9:28.

Many there, as well as volunteers around the world, are helping us prepare to do that work, which is also related to Matthew 24:14. A true witness will be given to the world.

Jay Chang, from China, sent me a link to an article in Pravda titled: Germany wants WWIII? (see Pravda: ‘Germany wants WWIII?’).  The Russians are more publicly concerned about the possibility of Germany leading World War III than the Americans are. WWIII, however, will cause massive destruction to the USA, UK, and Canada, and NOT to Russia, and it will be led by the Germans.

Speaking of the Russians, a United Nations’ report came out that disputed Russia’s claims of not having direct military involvement in Ukraine (see UN reports Russian troops are fighting in Ukraine, despite Kremlin denials).  Both Russia and the European Union want Ukraine.  Biblically, even if the Ukrainians align with the European Union for a time, the Bible teaches that the ‘kings of Medes,” which seems to include leaders in Russia and Ukraine, will unite against the end time European ‘daughter of Babylon (Jeremiah 51: 28-33).

The Europeans were able to restart their Large Hadron Collider and have already gotten some of the results that they have hoped for (see CERN’s collider restarts).  Since the Beast of Revelation 13 will be European (check out Europa, the Beast, and Revelation and also watch the YouTube video Can You Prove that the Beast to Come is European?), I have long felt that the Large Hadron Collider project had major military potential (see Thiel B. 2012 and the Rise of the Secret Sect. Nazarene Books, 2009, p. 85).   I believe that Germany’s FAIR, along with the LHC and other technology, will help the Europeans produce military weaponry to fulfill certain end time prophecies. Since Revelation 13:4 is discussing what seems to be a unique type of warfare, this warfare likely includes certain high-tech weapons (electromagnetic pulse, neutron, unique delivery systems, etc.) that will be effective for a while (ultimately the Europeans will be overcome by what appears to be a Russian-led, mainly Asian, confederation, cf. Jeremiah 50:41-43 & Daniel 11:44, possibly by exploiting some technological flaw, like creating a software virus, etc., while also amassing troops, etc.). The FAIR and the LHC projects are also likely to spin-off economic benefits that may help propel Europe to be (for a short while) the economic leader of the world (cf. Revelation 18).  While the U.S.A., Australia, and others are currently worried mostly about China and Russia, the European developments will not be good for the Anglo-descended lands, including England.

Two readers sent me information where medical science professionals admit that something like half of all published ‘scientific’ medical studies are wrong, whereas other have also implicated other aspects of mainstream ‘science’ (see ‘Science’ concludes that perhaps half of what is called science is probably false).  This comes as little surprise to me as I have long realized that funding and ‘political correctness’ affect results that are supposed to be scientific.

In the USA, it passed a bill intended to reduce some aspects of espionage on its residents (see US Congress approves new spying program).  The prophetic reality is because of leaks about various USA espionage programs, the Europeans do not trust the USA like they once used to and this will not work out well for the USA (Daniel 11:39).  The changes that the USA just approved will not truly appease the Europeans.

The concluding comments in this particular letter are related to the recommended sermon for the week.

Notice the following scriptures which show a time element in the work:

27 Isaiah also cries out concerning Israel: “Though the number of the children of Israel be as the sand of the sea, The remnant will be saved. 28 For He will finish the work and cut it short in righteousness, Because the Lord will make a short work upon the earth.” (Romans 9:27-28)

33 And those of the people who understand shall instruct many; yet for many days they shall fall by sword and flame, by captivity and plundering. (Daniel 11:33)

The time will come when we cannot work as we can now. Notice what Jesus taught:

4 I must work the works of Him who sent Me while it is day; the night is coming when no one can work. (John 9:4)

We need to be supporting the work now.

Sadly, because “the love of many will grow cold” (Matthew 24:12), many Christians will not have the zeal or sufficient love of the truth to properly support the short work.

A time will come when people will not be able to get the information about God’s truths:

11 “Behold, the days are coming,” says the Lord God,
“That I will send a famine on the land,
Not a famine of bread,
Nor a thirst for water,
But of hearing the words of the Lord.
12 They shall wander from sea to sea,
And from north to east;
They shall run to and fro, seeking the word of the Lord,
But shall not find it. (Amos 8:11-12)

While some other groups have a grasp that the ‘short-work’ will be done, only we in the Continuing Church of God have much understanding of it and are working to take the steps to be ready to do our part in it.

We in the Continuing Church of God are preparing for the ‘short work’ and the coming ‘famine of the word.’ By having more information available in more languages we are building a ‘data-base’ that will assist in the ‘short-work.’

Please keep the work, including the ‘short work,’ in your prayers as we work to prepare for it.