Greetings once again from Grover Beach!

We had a Sabbath service in Boca Raton, Florida last week.  We were able to meet with a couple of people in CCOG that we had met before, plus had three others come that we got to meet for the first time.  Here is a photo: 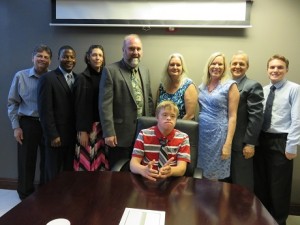 Since we have brethren scattered in many areas, it is always nice to be able to get together and meet when we are traveling to different areas. This is the third time we have been able to do this in the past twelve months in the USA (the other locations were in New Mexico and Michigan).

Passover and the Days of Unleavened Bread

Passover and the Days of Unleavened Bread occur later this month, with Passover after sunset on Thursday, April 21st.

Herb Haddon, of New Brunswick, Canada, sent me the following:

If you are in the USA or Canada and wish to host services for Passover and the Days of Unleavened Bread, please email me at cogwriter@aol.com.

I plan to give more information about Passover, etc. next week, which should assist many of our scattered brethren.

Some may wonder if we are reaching people in Muslim nations.  What I mean by that is that most of you realize that we actually have reached people in over 220 nations/territories, but may wonder if any in those lands are paying attention.

Well, we have received emails from people in Dubai and Libya who have expressed interest in the Continuing Church of God. These people do not seem to have a Church of God background, and we are attempting to determine how to best serve them. Currently we are doing so with our limited information in the Arab language, as well as various materials in English. At some point in time, either myself and/or perhaps Pastor Evans Ochieng or someone else may be able to visit with them. But we are trying to see if we will be able to speak to them, and learn more about their understanding and backgrounds. There are also legal matters we need to at least look at related to what can be done in those countries.

Of course, since we are determined to lead the fulfillment of Matthew 24:14 and Jesus’ instructions in Matthew 28:19-20, we expect to reach them the best we can (irrespective of possible governmental issues). The Bible says Jesus opens to the ‘door’ (Revelation 3:7-13) to reach people (cf. 1 Corinthians 16:9) and we are pleased when opportunities open up in lands where CCOG has not previously had a physical presence.

Ended up doing a two-hour radio interview yesterday on something called ‘Revolution Radio,’ which seems to just be internet-based.  We discussed some of the state of decline in the USA and the rising of the Beast power as well as the Kingdom of God and some aspects of the booklet Should You Observe God’s Holy Days or Demonic Holidays?

We utilize most radio opportunities as they arise as long as my schedule permits it.

Two days ago, I learned that late last month, someone in a non-Philadelphian Church of God group posted a variety of negative statements about me and the Continuing Church of God. Other anti-CCOG sources also reported those false accusations and added others of their own.

After praying about this and consulting with a couple of people in the Continuing Church of God about this, I decided it was best to address several of the false charges, so late yesterday I did post a response (see Bob Thiel addresses some false statements from ‘accusers of the brethren’).

While I do not address all the lies, innuendoes, and false statements about me or theContinuing Church of God (cf. Proverbs 26:4), sometimes it seems appropriate (cf. Proverbs 26:5) so I addressed several of them.

11 “Blessed are you when they revile and persecute you, and say all kinds of evil against you falsely for My sake.  12 Rejoice and be exceedingly glad, for great is your reward in heaven, for so they persecuted the prophets who were before you. (Matthew 5:11-12)

And that certainly has happened.

The Continuing Church of God is the fastest growing of the ten largest groups whose leaders once were part of the old Worldwide Church of God.

The terrorist group calling itself the Islamic State was accused of using ‘mustard gas’ in Syria and also made various threats against European cities (see Islamic State accused of using ‘mustard gas,’ which suggests that the USA did not get all chemical weapons in Syria destroyed as claimed; London, Berlin, and Rome threatened). The ‘Islamic State,’ as currently ran, will not succeed in its efforts to become the ‘caliphate’ for all Islam.  The Islamic State will be defeated. Yet, partially because of its existence, a confederation of Islamic nations in parts of Africa, the Middle East, and maybe other parts of Asia will form (Daniel 11:40-43).

11 million pages of documents related to international assets was released this week by a consortium of journalists.  The documents, called the Panama Papers, purport to show that politicians, wealthy people, and celebrities have hidden assets in various ways (see ‘Panama Papers’ and government corruption). While much of that can be legal, it was embarrassing enough to the Prime Minister of Iceland that he resigned because of it. Political corruption is not news, of course, but will be eliminated after the establishment of the Kingdom of God.

The prophet Zephaniah was inspired to write:

Brethren, we live in a time where many have been hurt by various churches and feel it is best not to become part of one.  The Bible warns against that in the end times, as Zephaniah wrote.  If you are still searching, please take the instructions in Zephaniah to heart.  Notice that gathering together before the time of the day of the Lord is a command in the Bible.

And if you have been hurt and are still undecided, Zephaniah is warning you to decide soon.  Especially if you think you are (or should be) a Philadelphia remnant Christian (Revelation 3:7-13), as they are the only ones specifically promised protection “from the hour of trial which shall come upon the whole world, to test those who dwell on the earth” (Revelation 3:10).