Another busy week as we prepare for the Fall Holy Days as well as work to fulfill Matthew 24:14 and Matthew 28:19-20, including on matters related to the Holy Days.

The Fall Holy Days are coming up soon, with the Feast of Trumpets which begins at sunset on October 2nd this year.

Here is a suggested Sabbath service for the Feast of Trumpets this year:

The next will be the Day of Atonement, which begins at sunset on October 11th this year.

The Feast of Tabernacles starts the following week, and begins at sunset on October 16th this year.

A booklet on the Holy Days is also available: Should You Observe God’s Holy Days or Demonic Holidays?

For information on the general locations of our congregations, check out the link:Congregations of the Continuing Church of God.

The latest edition (October-December 2016) of the Bible News Prophecy magazine has been mailed out in Spanish and in English to most of our subscribers (we still have a handful to send out). 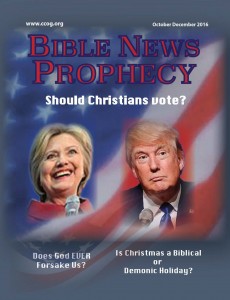 And for the first time ever, we were able to mail out most of the international and Spanish versions earlier than others–which is a good thing as it takes longer for them to reach our readers.

It will look different to our English-reading, non-African, subscribers. It will look basically the same as the edition that the Africans and non-English readers get.

In an effort to get the magazine in a more timely basis, make it available to others around the world, and to cut costs, the English edition of the magazine is now being printed by Amazon Createspace.

So, when you see it, you will notice that although the photographs of the online version are still in color, the interior of the magazine will be in black & white only. The outside covers, both online and in print, will remain in full color.

This will cut our printing costs in half.  Mailing costs for all editions now cost slightly more than printing costs for the USA and several times more for international mailings. We continue to look at this and believe that using Createspace to do some of the mailings as well will save funds.  We always strive to be proper stewards of the funds we have available.

For those who are not subscribers, as well as for those subscribers who cannot wait for the mail, here are links to the online versions in English: BibleNewsProphecy: October-December 2016 Should a Christian Vote?; and in Spanish: Noticias de Profecía de la Biblia – octubre-diciembre 2016: ¿Deberían votar los cristianos?

Decided to try something different related to the production of the BibleNewsProphecy sermonette video for this week.

We have added a few more graphics to this one. This is something I have been wondering about trying for some time.

We are hoping that by adding graphics that this may increase the number of views as well as increase the probability of one-time viewers to see more of our videos and perhaps also subscribe to our Bible News Prophecy channel.

We have not decided if we will continue to add graphics regularly (or to expand it to include video clips), because of time delays and other costs. But this may end up being a cost-effective way to improve the quality of the videos themselves and better reach more people.

We also ordered a new microphone which we have not yet received, which may improve the sound quality.

Kenya-based Pastor Evans Ochieng has been in Ghana providing information and discussing our relationship with those congregations. He was feeling ill the day he left for Ghana.  Please keep him in your prayers.

Bowing to public pressure and perceived political realities in Europe and the USA, the Europeans are considering scrapping the (TTIP) to come up with something else (seeEuropeans want to scrap TTIP and start other trade talks). The Bible shows that Europe will rise up for a time as a major trading power (cf. Revelation 18) and it is working towards doing that.

Eastern Orthodox Patriarch Bartholomew of Constantinople was praised as a “great ecumenist” by a Catholic writer last week (see Patriarch Bartholomew praised as a ‘great ecumenist’–will this end in disaster?). Both the Eastern Orthodox and Roman Catholics call the sun-god worshiping Emperor Constantine as great. Constantine blended paganism and politics in his preferred religion, and we are seeing that others are trying to do that as well.

Over in the USA, there have been several shopping center shootings in the past week of so (e.g. Shopping center shootings in Texas, Florida, and Washington)–there is violence in the land (cf. Ezekiel 7:23). Also in the USA, the highly anticipated first presidential debate between Donald Trump and Hillary Clinton included them making inappropriate and inaccurate statements (see Donald Trump and Hillary Clinton debate, but have trouble telling the truth). This does not bode well for the USA.

Over in the UK, its Defense Minister Michael Fallon vowed to stop Europe from developing its own army (see DW: UK ‘will oppose any idea of EU army’ despite impending Brexit). Apparently, the British Defense Minister does not realize that the Bible shows that Europe will have a “great army” (Daniel 11:25). Europe will get that army and it will not turn out well for the UK, USA, or their Anglo-Saxon descended allies (cf. Daniel 11:39).

23 Speak to the people of Israel, saying, In the seventh month, on the first day of the month, you shall observe a day of solemn rest, a memorial proclaimed with blast of trumpets, a holy convocation. (Leviticus 23:24)

Most of the Greco-Roman churches do not keep the Feast of Trumpets nor any of the other biblical holy days that generally occur in the Fall. Yet, these Holy Days portray many pivotal events in God’s plan.

The Feast of Trumpets not only pictures the coming of Christ to resurrect the firstfruits from the dead, it also pictures the terrible time of devastation just ahead and the intervention of Jesus Christ to save the living from total annihilation and to establish the Kingdom of God on earth.

The fourth Holy Day, the Feast of Trumpets, is observed in “the seventh month, on the first dayof the month” (Leviticus 23:23-25).

The number seven in God’s plan signifies completion and perfection. The seventh month of God’s calendar (occurs in September and/or October) contains the final four festivals, picturing the completion of God’s great master plan for us. The festival that falls on the first day of this month marks the beginning of the final events in God’s plan.

It is another annual Sabbath of rest from one’s regular work, and it was to be a memorial of blowing of trumpets (Leviticus 23:24-25). It is also a time to learn God’s ways (Nehemiah 8:2-3; cf. Ezra 3:1-7). Much of what happened to the children of Israel was written for our “examples, and they were written for our admonition, upon whom the ends of the ages have come” (1 Corinthians 10:11).

Seven trumpets are shown as being blown in the Book of Revelation.

Notice what Revelation teaches about the last trumpet:

15 Then the seventh angel sounded: And there were loud voices in heaven, saying, “The kingdoms of this world have become the kingdoms of our Lord and of His Christ, and He shall reign forever and ever!” 16 And the twenty-four elders who sat before God on their thrones fell on their faces and worshiped God, 17 saying: “We give You thanks, O Lord God Almighty, The One who is and who was and who is to come, Because You have taken Your great power and reigned. 18 The nations were angry, and Your wrath has come, And the time of the dead, that they should be judged, And that You should reward Your servants the prophets and the saints, And those who fear Your name, small and great, And should destroy those who destroy the earth.” 19 Then the temple of God was opened in heaven, and the ark of His covenant was seen in His temple. And there were lightnings, noises, thunderings, an earthquake, and great hail. (Revelation 11:15-19)

The Feast of Trumpets pictures the future blowing of trumpets and the reality that Jesus will come and establish the Kingdom of God on the earth. The good news of coming Kingdom of God is a big part of what Jesus wants His servants to proclaim now (Matthew 24:14; 28:19-20), and then the end will come (Matthew 24:14). And the Feast of Trumpets points to Christ’s victory over this world.