Last evening, I noticed that Facebook stopped an advertisement related to the Fall Holy Days of what looks to be a Jewish or Messianic group. Facebook gave a bogus reason for stopping the ad by falsely claiming it was sexually provocative (see BIN: Facebook Deems Rosh Hashannah “Sexually Provocative”).

In this time of blatant news media support for immorality and where places like YouTube and Facebook censor (and sometimes shut down) voices for supporting aspects of biblical morality, we determined that it was wise to have backup platforms for our biblically-based videos.

So, earlier this year we started with a place called Vimeo for our sermonette backup channel (see Vimeo Bible News Prophecy).

We chose Vimeo because it was perhaps the most popular platform after YouTube and it is available on streaming services such as Roku. While we have to pay a small amount to be on it, this is a platform that does not have commercials. Some churches also use it. However, Vimeo takes a strong censorship approach on topics related to speaking against forms of sexual immorality (they will shut channels down, even easier than YouTube), so there are various sermonettes we cannot have ‘live’ for people to be able to watch on that platform.

Thus far, Vimeo has basically been a backup channel as few have watched our sermonette messages on it.

In order to have another sermonette platform that we can put all of our sermonettes live on, we then added Brighteon (see Brighteon Bible News Prophecy).

At first, Brighteon had commercials that preceded our sermonettes, and that was a concern. Now they do not. Hence, this has made it a more acceptable additional platform to be on. And we do not pay to be on it. But because of upload restriction, sermons do not really fit on this platform, so that is why we only have sermonettes at Brighteon.

In order to have backup for all of our channels, we then ended up adding BitChute.

Here are the four channels we now have at BitChute:

What is interesting about BitChute is how it shows people who go to its main video page the latest videos that were uploaded. This way people, who normally would not find our channel, get an opportunity to see (for a short time) what we just uploaded (sort of like a free advertisement). So, this helps it be a platform to partially assist with the fulfillment of Matthew 24:14 and 28:19-20.

Anyway, while we are not yet getting massive views on Brighteon or BitChute, we seem to get dozens of views of many of the videos that we upload to these channels (with more at BitChute). Mainly, those channels now seem to be reaching people that we were not reaching before.

As more censorship occurs on platforms such as YouTube and Vimeo, we may well see that Brighteon or BitChute will gain more viewers for us than YouTube. But even if not, having those two additional channels is helping us give a witness to people (even in less than massive amounts) we otherwise would not reach. So, these are “doors” (Revelation 3:7-8) we have decided to continue to go through as they are open to us.

Members of the Eastern Orthodox Church generally believe that their church is the original one and holds to the doctrines of original Christians.

Notice one example of that:

… be Orthodox. We wish to make that choice available and to urge people to become part of this original Church of Jesus Christ. (Gillquist PE. Becoming Orthodox. Wolgemuth & Hyatt, Brentwood (TN), 1989, p.182).

But that is not true. The Eastern Orthodox are not the original Church of Jesus.

Many are not interested in the truth about Church history as they feel that their church is right and whatever it taught them about history was correct.

Sadly, this has spilled over into many Church of God groups as they frequently have made assertions and statements about church history that are fairly easy to disprove. Yet, some refuse to fix errors this way even when they are pointed out.

Now consider that in view of the following statements from the New Testament:

3 … contend earnestly for the faith which was once for all delivered to the saints. (Jude 3)

15 But sanctify the Lord God in your hearts, and always be ready to give a defense to everyone who asks you a reason for the hope that is in you, with meekness and fear; 16 having a good conscience, that when they defame you as evildoers, those who revile your good conduct in Christ may be ashamed. (1 Peter 3:15-16)

You cannot “contend earnestly for the faith which was once for all delivered to the saints” if you do not know what it was. You cannot give a defense/answer for your original faith if you to not know what it is. Also, if you rely on wrong information, which many in the various COG groups do, you will be ashamed as others may shame you for promoting myths.

One of the reasons that the world’s churches do not keep God’s Holy Days is because they do not properly understand early Christian history.

One of the reasons that the other COG groups are not Philadelphian (though some do have Philadelphians in their midst) is because they do not properly understand Church history and some of the prophetic ramifications of it. 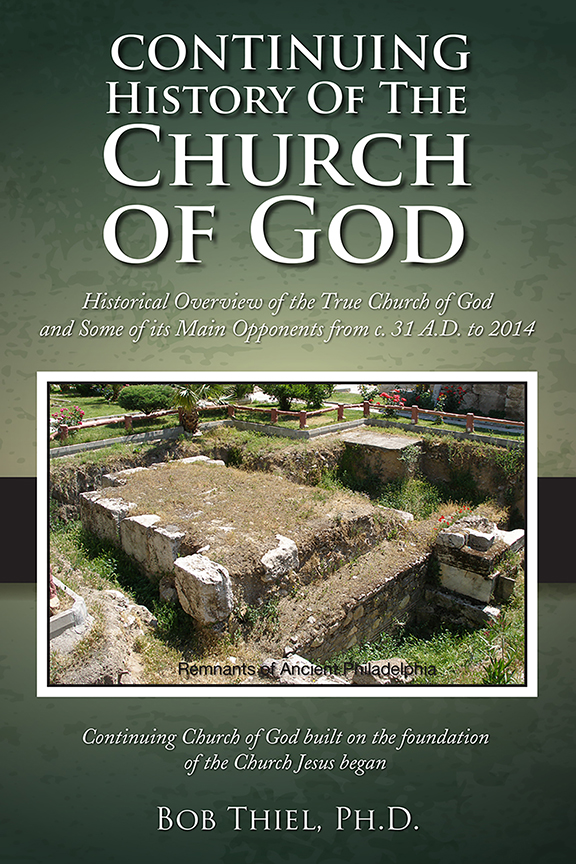 For more on church history, check out our free online book: Continuing History of the Church of God.

Iran is disappointed that the USA pulled out the nuclear deal and that the Europeans have not done more to assist them. So, Iran is openly violating aspects of that nuclear deal (see ‘Iran Using Advanced Centrifuges, Violating Nuclear Deal’ ‘Does this Confirm Prophecy of a Speedy Gog and Magog?’). The Bible indicates that Jerusalem will be damaged by an Iranian/Syrian power (Isiah 22:6-9), and as Iran is getting more isolated from the West, this may encourage it to take actions like that which would not be approved by some of the Western powers.

A small political party in Israel is calling for the construction of another temple (see Israeli political party Otzmah Yehudit backs call for a ‘Third Temple’). While some see this as a sign that another massive temple will be built, it is more in tune with being a sign that politics and religion will be more intertwined in Israel in the future. The time will come when daily animal sacrifices will be resumed. It will seemingly need to have political backing for this to occur, and the emergence of certain religious parties in Israel look to be a factor for that.

Complications associated with Britain’s attempt to leave the European Union continue to arise (see Brexit, UK Parliament, Scottish Court, & Nigel Farage’s proposed solution). What the UK Parliament should realize is that the EU does not need to grant it an extension. The EU wants any nation who leaves it to suffer and the French Foreign Minister said that France is not inclined to grant an extension at this time (see DW: France says ‘non’ to Brexit delay). As we have said in the past, the Brexit matter will, ultimately, not end well for the UK (Daniel 8:24-25; Isaiah 17:3-4).

Russia, China, and the European Union (see Russia & China stockpiling gold because ‘they can read the writing on the wall’ and ‘China’s Trade with US Tumbles as Tariff War Shows Its Teeth’ ‘so Beijing is building bridges to the EU through the belt and road’) continue to take steps to bypass the US dollar and setup up more trade between Europe and Asia. This is consistent with many biblical prophecies (cf. Ezekiel 27:12-16; Revelation 18), yet most in the US act like it will continue to dominate for another century. That is not the case (cf. Daniel 11:39).

US Democratic presidential hopeful, and practicing homosexual, Peter Buttigieg says that God will punish people for negatively impacting the climate (see ‘Buttigieg: God will punish us for global warming’). While the Bible does say that God will “destroy those who destroy the earth” (Revelation 11:18), the Bible clearly teaches that God intends to punish those who practice sexual immorality including homosexuality (cf. Jude 7; 2 Peter 2:6) as well as those who approve of such behaviors (Romans 1:18-32).

The Apostle John was inspired to write:

1 Behold what manner of love the Father has bestowed on us, that we should be called children of God! Therefore the world does not know us, because it did not know Him. 2 Beloved, now we are children of God; and it has not yet been revealed what we shall be, but we know that when He is revealed, we shall be like Him, for we shall see Him as He is. 3 And everyone who has this hope in Him purifies himself, just as He is pure. (1 John 3:1-3)

Brethren, be grateful for the hope we have and strive in this age to be like Him.