It’s been a bit more stressful than usual due to changes of banks, book printers, and other matters.

The forced change from CreateSpace to Kindle Direct Publishing has been difficult. It costs us more time to get literature approved, the procedures appear more complex, and it takes longer to get book orders shipped. But, for the time being, it still looks like our best option. 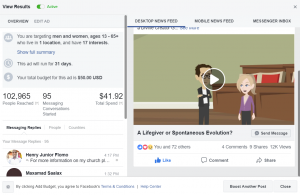 According to this report, nearly 103,000 people were reached with this promotion and 12,000 watched at least part of our animation: A Lifegiver or Spontaneous Evolution?

However, since this was through Facebook, YouTube does not count those views, so many people believe our animations have only a small fraction of the impact that they are actually having. On this particular animation, YouTube only shows about 300 views. Anyway, it is great that thousands have been able to be reached with the truth.

Last Thursday afternoon, I was on the radio on the NutriMedical Report with Dr. Bill Deagle. We discussed Saudi Arabia and prophecy related to the coming King of the South (Daniel 11:40-43).

Got two reports related to the Rift Valley in Kenya:

My trip to Rift valley on Monday was cancelled when I reached Kilgoris where I got a report that the two tribes Masai and Kalenjin were fighting. So I couldn’t move on with my trip. I stopped there and meet with pastors Sawek and Kirui. After that I went back up to Kisii. After one day I came back home.

I gave Pastor Sawek funds for the iron sheets to build his house.

I talked with them about the work in Rift valley. They told me that everything is okay except there’s a problem in Kaplecho. So I will see how to help the situation of Kaplecho in January. I  have  other two projects before me still. The congregation of Migori are having a project that needs our support. So I will send some funds tomorrow to support them. After that I am going to support the building of Muhuru congregation who still keeping Sabbath under the trees. We are going to start that project next week. The book of God’s Holly days or demonic holidays is also in demand. So I want go and print it more.

I greet you in the name of messiah, here in Rift Valley we are well. On 6th November this year Pastor Ochieng was preparing to come to Trans Mara east but he received report of insecurity on the way where he was supposed to pass through. But we managed to meet at Kilgoris where the security was stable. Me and Pastor William Kirui. after meeting we inform the how the churches are doing well in Rift Valley we also inform him about churches not constructed like Kabolecho and others.

Lastly he gave me the iron sheet that I request for construction of a house, now I am looking for way of constructing the house. I thank you so much because this house help to keep the church instruments and housed the visitors. May God bless you.

I am pastor Tiongik Sawek

So, there are safety considerations in even more parts of Kenya now.

Also, we received from a French-speaking pastor from Burundi who lives in what seems to be a refugee camp with others from Burundi in Kenya. We sent him some French language literature earlier. He  has informed me that a group of about 35 wants to be part of us, and that another 17 may as well.  Evangelist Evans Ochieng will probably need to visit them in the near future.

People like Abraham, Isaac, and Jacob were capitalists. Jesus (Matthew 25:14-28) and Peter (Acts 5:3-4) made capitalist supporting statements, as well as statements in support of the poor. Expect the Vatican to have more involvement with politics for a time (cf. Revelation 17:1-13), but also understand that supporters of the Beast will turn against and destroy the Church of Rome (Revelation 17:15-18).

French President Macron publicly called for a true European army this week (see EU to spend one billion euros on quantum tech to compete with USA and China; France’s Macron wants European military spending to go to European firms; ‘Europe Must Rebel’). The Bible shows that Europe will end up with a “great army” (Daniel 11:25) and more and more in Europe seem open to the idea. Europe will reorganize (Revelation 17:12-13) and support a militaristic dictator (Revelation 13:1-10).

Speaking of militaristic, a former US Marine is believed to have been the one who killed a dozen (or more as there are injured as well who may die) people in California late last night (see ‘City is full of violence’: At least 13 dead in Thousand Oaks). “Thy Kingdom come!” (Matthew 6:10).

15 But sanctify the Lord God in your hearts, and always be ready to give a defense to everyone who asks you a reason for the hope that is in you, with meekness and fear; 16 having a good conscience, that when they defame you as evildoers, those who revile your good conduct in Christ may be ashamed. (1 Peter 3:15-16)

Brethren, in this more and more anti-biblical age, we Christians need to know what the Bible teaches so that we can give an answer (KJV), a defense (NKJV), of why we are convinced Jesus is the Messiah as well as why we are willing walk in His ways.

The current sermon series is intended to assist us all in doing so.