From here, it has been a full week of preparing for the “short work” (Romans 9:28) by updating articles, working on books, and putting additional information on the internet.

In addition to assisting with Matthew 24:14, this is intended to help all “seek first the kingdom of God and His righteousness.”

As far as helping “all” goes, Andre Nelson informed me yesterday that the one-month Facebook promotion for the animation A Lifegiver or Spontaneous Evolution? ended and that it reached 129,692 people and was viewed 14,000 times.

Chichewa Bibles to Malawi and Mozambique

In the past, we have had a lot of requests for Bibles in the Chichewa language from our members in Malawi and Mozambique.

We mentioned this need in the weekly Letter last August. Anyway, the Bibles arrived, 75 of them. Radson Mulozowa sent the photo below: 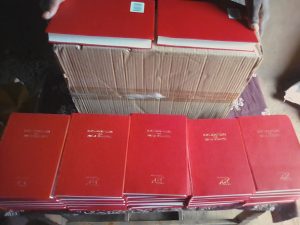 Last Thursday afternoon, I was on the radio on the NutriMedical Report with Dr. Bill Deagle. We discussed matters related to the Sanhedrin and animal sacrifices, as well as the shooting in Thousand Oaks, California.

Can convincing fake videos be produced?

1 But know this, that in the last days perilous times will come: 2 For men will be lovers of themselves, lovers of money, boasters, proud, blasphemers, disobedient to parents, unthankful, unholy, …

12 Yes, and all who desire to live godly in Christ Jesus will suffer persecution. 13 But evil men and impostors will grow worse and worse, deceiving and being deceived. (2 Timothy 3:1-2,12-13)

Notice the above was for the last days.

Videos typically have more impact on an audience because it is believed that they are harder to fake than photographs. They also look more convincing than a text read out on behalf of a politician. This is no problem for modern technologies, however. …

Technologists at DARPA are particularly concerned that new AI techniques for creating fake videos make it almost impossible for them to be recognized automatically.

And while scientists in military uniforms are racking their brains over how to get ahead of other countries in such a specific information arms race, their civilian colleagues are already calling the trend “an information apocalypse” and “disinformation on steroids”. https://orientalreview.org/2018/10/31/deepfakes-and-political-manipulation/

DARPA is the Defense Advanced Research Projects Agency, a US government agency. With artificial intelligence, for example, going over our videos, they could have mannerisms down pat for me as well as some others in CCOG. So well that the videos would convince almost any one without a strong love of the truth.

There is an expression that goes like, “just because you are paranoid, that does not prove no one is out to get you.”

So yes, I expect that one day some governmental or other entity will have videos of me and/or others in the CCOG faked and saying things that we would never say.

When that happens, be careful not to misjudge. Deceivers will “wax worse and worse” in the end times (1 Timothy 3:13, KJV).

They have been fighting fires in various parts of California (see ‘California Firefighters Battle Blazes At Both Ends Of The State’). A Northern California fire, called the “Camp Fire,” is now considered to be the deadliest in California history. Expect more fires. California Governor Brown calls the situation the “new abnormal.” Last year, he made comments about fires and the “wrath of God” and we ended up making a sermonette video about that (watch Fires and the Wrath of God). Although the main highway connecting our part of the state to the rest of it was shut down for a time, we have not been noticeably affected by the current fires.

The European Union and United Kingdom announced a tentative deal on the departure of the UK from the EU (Brexit). Some consider it a BRINO-Brexit In Name Only. Today, some there were UK Cabinet resignations because of it (see BRINO or Hard Brexit: Resignations from Theresa May’s cabinet after draft agreement with the EU). Various ones are not sure if the UK Parliament or the EU nations will actually approve the deal. The Brexit vote has turned many in the EU against the UK, which is consistent with end times prophecies.

US President Donald Trump has been in the news for many reasons that look to affect prophecy. Among other things, he has further inflamed European leaders. We are seeing more and more call for things like a European army as well as a European empire (see Donald Trump lashes out against Europe defending itself–Europeans pushing for an empire). The Bible shows that Europe will have a “great army” (Daniel 11:25; watch also PESCO and a Great European Army) and an empire (cf. Daniel 11:29-43).

While Donald Trump has inadvertently pushed Europe towards its prophesied destiny, it will likely take a combination of economic (see ‘European Central Bank In Panic Mode As Economy Stalls’ ), religious, and ethnic matters to bring the final “empire” about (see Europa, the Beast, and the Book of Revelation).

As far as Donald Trump goes, some of his trade and financial statements and sanctions are pushing more nations further away from always using the USA dollar for international trade (see End of US Dollar Dominance? South Korea bypassing dollar in trade with Iran).

Some of his international policies are promoting military unity in the Arab world. A pan-Arabic military exercise is currently gone on (see Arab NATO, PCG, and the King of the South). Ultimately, the Bible shows that a militaristic confederation will form in North Africa and the Middle East (Daniel 11:40-43; Ezekiel 30:2-8).

3 Blessed be the God and Father of our Lord Jesus Christ, who according to His abundant mercy has begotten us again to a living hope through the resurrection of Jesus Christ from the dead, 4 to an inheritance incorruptible and undefiled and that does not fade away, reserved in heaven for you, 5 who are kept by the power of God through faith for salvation ready to be revealed in the last time.

6 In this you greatly rejoice, though now for a little while, if need be, you have been grieved by various trials, 7 that the genuineness of your faith, being much more precious than gold that perishes, though it is tested by fire, may be found to praise, honor, and glory at the revelation of Jesus Christ, 8 whom having not seen you love. Though now you do not see Him, yet believing, you rejoice with joy inexpressible and full of glory, 9 receiving the end of your faith — the salvation of your souls.

10 Of this salvation the prophets have inquired and searched carefully, who prophesied of the grace that would come to you, 11 searching what, or what manner of time, the Spirit of Christ who was in them was indicating when He testified beforehand the sufferings of Christ and the glories that would follow. 12 To them it was revealed that, not to themselves, but to us they were ministering the things which now have been reported to you through those who have preached the gospel to you by the Holy Spirit sent from heaven — things which angels desire to look into.

13 Therefore gird up the loins of your mind, be sober, and rest your hope fully upon the grace that is to be brought to you at the revelation of Jesus Christ; 14 as obedient children, not conforming yourselves to the former lusts, as in your ignorance; 15 but as He who called you is holy, you also be holy in all your conduct, 16 because it is written, “Be holy, for I am holy.” (1 Peter 1:3-16)

Brethren, we are privileged to have knowledge that many have longed for throughout the ages. The prophets in the Old Testament, though inspired by God, did not know how God would have those prophecies fulfilled in Jesus.

Despite trials and tests, remember to be thankful.  Remember, “He who called you is holy … be holy in all your conduct, because it is written, ‘Be holy, for I am holy.’ ”

We are able to understand many things that God’s people, prior to Jesus’ arrival, never did.