Greetings this week from Florida!

I plan to be in Florida until Sunday, April 3rd.  Which means I am scheduled to be here the Sabbath of April 2, 2016.

As announced before, we arranged to meet for services at the West Boca Executive Office Suites at 7777 Glades Rd #100, Boca Raton, FL 33434. Services are to begin about 1:30 pm.

If you live in Florida, and/or may wish to visit and would like to come for services, please email me. My email address is cogwriter@aol.com.

Because my wife Joyce left for Florida several days before me, and there was no one else to watch our youngest son, I decided that this would be a good time to not make a new sermon and sermonette personally, but instead to recommend  a message I made a while back, and a sermonette that John Hickey gave in New Zealand. 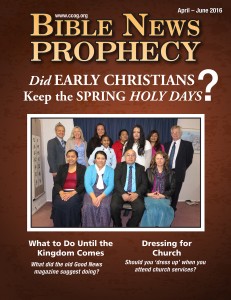 Shortly before our youngest son and I headed off to Florida, we received and mailed out the April-June 2016 edition of our Bible News Prophecy magazine. We also enclosed a copy of our new booklet Should You Observe God’s Holy Days or Demonic Holidays?, which, interestingly enough, has the same cover photo and background color (though it is half the page size, though about 3 times the page count).

In about three months, when we finish and send out the July-September 2016 edition of Bible News Prophecy magazine, we expect to include another new booklet (on the Gospel of the Kingdom of God) then as well.

Over in the US state of Georgia, its governor bowed to pressure from the homosexual lobby to not provide distinct legal protection for those who do not support the LGBT agenda (seeGeorgia governor against assuring religious liberty and freedom of conscience).  The USA is less and less respectful of religious conscience, and its leaders do not believe the biblical warnings about approving sexual immorality (cf. Romans 1:18-32).

Because of the terrorist attacks in Brussels, the USA is calling for more ‘intelligence sharing’  (see USA wants more inetelligence sharing in light of Brussels attacks, but does not realize the risks it is taking). While that may assist in fighting terrorism, the USA is more and more putting itself in a position that it is revealing its own espionage techniques and results with the Europeans–a group that is prophesied to one day takeover the USA (see Daniel 11:39).

In Pakistan, there was a deadly attack by Islamists who want to eliminate those who do not share their faith. (see Islamists kill professing Christians in Pakistan).

Prior to the meeting, the government of Pakistan told the USA that it will continue to develop nuclear weapons and is not willing to stop as the USA prefers (see Pakistan tells USA it will continue its nuclear missile development). Nuclear weapons from Pakistan may well end up in the arsenal of the final King of the South of Bible prophecy (Daniel 11:40). But if so, this will NOT stop the King of the South from eventual defeat (Daniel 11:40-43).

The Book of Proverbs teaches:

10 “The fear of the Lord is the beginning of wisdom,
And the knowledge of the Holy One is understanding.
11 For by me your days will be multiplied,
And years of life will be added to you.
12 If you are wise, you are wise for yourself,
And if you scoff, you will bear it alone.” (Proverbs 9:7-12)

Brethren, we live in a time of skeptics and critics. But God’s people are to value instruction and correction.  As we get closer to the Spring Holy Days, consider that we all need to improve, and that includes you and I personally.