We received the new booklet Prayer: What Does the Bible Teach?, back from the printers and was able to mail it, along with the April-June 2015 English edition of our Bible News Prophecy magazine to most of our English subscribers (the remaining English copies are expected to be sent tomorrow).

This issue has a couple of articles related to the Passover and we believe that we sent it out early enough for most of you to be able to read those articles before Passover this year.

Now the Spring Holy Days are right around the corner. Passover will be after sunset Thursday April 2, 2015.

The The Night to Be Observed will be the next night.  And the first Day of Unleavened Bread lasts until sunset April 4.

Because the last day of unleavened bread is on a Friday (April 10) in 2015, followed by a Sabbath (April 11), some may wish to host services for others that weekend.

FEAST OF TABERNACLES
According to the number (of expected attendees) which I got in Transmara, it will force us to have more than  four sites of feast of tabernacles. These are NDHIWA, TANZANIA, BOMET, NAIROBI and TRANSMARA.

PASSOVER SITES
We shall have 9 sites for Passover. NDHIWA, NYAKACH, KURIA, TRANSMARA, BOMET, KISII, NAIROBI, MBITA and TANZANIA.  Other congregations will come together in these places.

We are trying to figure out how to best support our brethren with what we can over there. 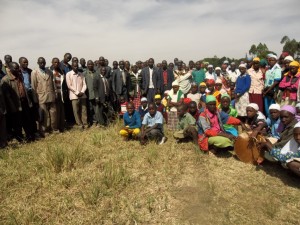 Pastor Ochieng reported two weeks ago, that we have 53 members there, including children (see Letter to the Brethren: March 12, 2015).

Because we hope to be able to attend the expected Feast of Tabernacles’ sites for 2015 in both the USA and Canada, my wife and I decided to arrange to go to New Zealand for Pentecost weekend (runs from sunset May 22nd through sunset May 24th, 2015).  We plan to fly out of New Zealand the next day.

We had told those in New Zealand back in 2013 that we would try to come back in 2015.  Because of multiple festival obligations as well as how airline schedules fall this year, we felt it would be best to try to visit in May 2015.

The Gospel in Dutch

We received another long article translated into the Dutch language.  It is on the gospel and the translated version is now online.  It is available at Bij Jezus en de vroege Kerk lag de nadruk op het evangelie van het Koninkrijk van God.

We are interested in reaching out in all languages (cf. Revelation 7:9).

Received the following email from Ondigo Ochieng (not related to Pastor Evans Ochieng) our host in Suna-Migori, Kenya:

It is interesting that the Lord God opened for me a door to be a radio guest at Onagi FM in Migori. It was to be arranged at Milambo FM, but brother Charles Ongulo, who sponsored this, did not get a chance at Milambo whose frequency covers up to parts of Kehancha.

I woke up early to catch up with time [it was supposed to be from 5:15-6.00am on Sunday, but we got a lot of time from 6:10-7:00am.I delivered the message about the coming kingdom of Jesus Christ.

Many have contacted me wanting to more about this truth about the kingdom of God including one of the elders of SDA church at Isibania.

God willing, I will go to Isibania to see some two people who wanted to know more about Christ’s Kingdom on earth. I have so far encountered a lot of questions from different people. I have therefore come to realize that the gospel, if preached through social media, can reach many.

Again, I am grateful to the brothers who have translated the BNP into Dholuo. This will help many of us to clearly understand the truth in our first language.

After receiving this Monday, I sent Ondigo a link to an article titled SDA/CCOG Differences: Two Horned Beast of Revelation and 666, to try to assist.

Russia made some threats to Denmark and this has sparked concerns there and elsewhere (see Russia on NATO and threats to Denmark; What about North America?).  Supporters of Russian President Vladimir Putin commissioned a bronze sculpture of him dressed like the ancient Roman Emperor Julius Caesar (see Julius Czar Putin?).  The term Czar is a shortened form of the word Caesar. It has been reported in the past the Vladimir Putin sees himself as the one true leader of a revived “Holy Roman Empire” (see also (Putin claimed to be re-establishing ‘Third Holy Roman Empire,’ but that is happening elsewhere).  While those in the West tend to look at the European version of this (and there will be one per Revelation 13), Vladimir Putin believes that Russia and its resistance to some of the decadence of the West makes him the true ruler of such an empire.  The biblical reality is that Russia wants an empire and ultimately will be a leader in a coalition of peoples that will destroy the final European version of the old Roman Empire  (cf. Jeremiah 50:41-43; 51:11).

Over in Italy, Pope Francis called a slight stir by being involved in what has been called a “half miracle” (see Pope Francis allegedly performs a ‘half miracle’).  Basically, he kissed a glass vial allegedly containing dried blood of  a bishop named Gennaro/Januarius according to legend, was saved by a woman called Eusebia just after his death in c. 3o5 A.D.  We know that the false church has had signs and lying wonders since the third century–and this was prophesied in Isaiah 47.  We also know that the Apostle Paul warned that “evil men and impostors will grow worse and worse, deceiving and being deceived” (2 Timothy 3:13).  We also know that the final Antichrist, who is expected also to be an ‘antipope’ will perform signs and lying wonders (Revelation 13:11-15).  While Pope Francis has not done the dramatic signs the Bible tells about in the end times, he possibly could be.  But if not, and because of his age and certain other public comments he allows for another, he is setting the stage for the rise of the final Antichrist.

Britain sent more military  support to the Falkland Islands.  This partially is related to concerns about Russian support of Argentina (see Britain sends more military to Falklands as Russia blasts UK inconsistency).  There will be wars and rumors of wars, before the end (Matthew 24:6).  But ultimately, British sovereignty over these islands will be gone and many residents there will be ‘plucked up’ from their land (cf. Deuteronomy 28:58-63).

There is shock in Europe and elsewhere that a copilot decided to intentionally crash a Germanwings’ aircraft flying into to Dusseldorf, Germany (see Germanwings’ suicide murder).  Suicide and mass murder are wrong.  Someday, humans will be prevented from doing such horrific acts (Isaiah 11:9; 30:20).

In parts of Kenya and the USA we continue to have droughts (see Drought in USA West and Northern Plains; United Nations’ Global Water Day).  The time will come when even places like the USA will face food shortages (cf. Ezekiel 5:12; Matthew 24:7).

In general international news, a study came out warning about the increasing use of antibiotics in livestock (see Antibiotic use in livestock is a threat to humans (and livestock).  This, in my view, puts livestock and humans at greater risk of pestilences.  An interesting note is that Europe DOES NOT allow the type of overuse of antibiotics that places like the USA, India, and China do.  This could mean that pestilences that hit some lands in Asia and North America would be less likely to be as severe in Europe.  This could strengthen Europe relative to the USA in the end times.

Over in Jerusalem, yesterday was the The Sixth Annual International Temple Mount Awareness Day according to the Temple Institute (see The Sixth Annual International Temple Mount Awareness Day).  Although this particular group (whose public location in Jerusalem I was able to visit in 2013) has some ideas that do not align with the Bible, it is at/near the forefront of wanting to get animal sacrifices re-instituted–this is something that will happen according to Bible prophecy (e.g. Daniel 9:27).  However, unlike what many (mainly Protestants) think, it is NOT necessary for a third temple in Jerusalem to be built for this to happen.  This is not only the position of the Temple Institute (who wants a third temple anyway), but also the Bible (cf. Ezra 3:6; see also Why is a Jewish Temple in Jerusalem Not Required?). Because of its interest in animal sacrifices, the Temple Institute could play a role in getting them resumed, and without a third temple.

What should you being doing between now and the Spring Holy Days?  Notice something from the Book of Lamentations:

39 Why should a living man complain, A man for the punishment of his sins?

If you do or do not have a problem with complaining, the Spring Holy Days are a time for you to examine your ways–and to really turn back to God.