We have been working on many matters, including those related to the Spring and Fall Holy Days.

As far as the Fall Holy Days for the USA, our primary Feast of Tabernacles’ site is planned for San Diego, California, but we are looking at having some type of a limited site in the Wichita, Kansas area.

Ended up with a radio interview this morning. I was on KVOI 1300 am out of Tucson, Arizona. The host (Chris DeSimone) and I discussed prophetic matters related to policies and statements of US President Donald Trump and how Europe and the USA will be being affected.

We have received several emails from a pastor in the African nation of Benin. He heard about our conference in Nairobi and encouraged us to have a similar one in his nation.

He also asked about printed materials, and we just sent him a copy of our booklets in English and one in the French language. 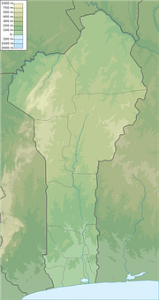 Benin is is bordered by Togo to the west, Nigeria to the east, Burkina Faso and Niger to the north, and is fairly close to Ghana. If the door to Benin is opening, then we will plan to send someone over there to visit them.

Google reported that our campaign with them reached 3,104,839 computers last month. This is down from the previous month, but that is because a higher percentage of people responded and showed interest.  We could have reached more, but we have limited our budget to continue to provide support for the needs in Africa. We must be doers of the word and not hearers only (cf. James 1:22; 2:14-17) as we are diligently working to fulfill Matthew 24:14 and Matthew 28:19-20.

The March-April 2017 edition of The Sabbath Sentinel ran another article I submitted.

The published article came from my article Another Look at the Didache, Ignatius, and the Sabbath. Because of the restrictions in article length for The Sabbath Sentinel, I submitted just a few pages which they published. This is the third part of the article that they have ran related to this.

This series of articles being published in The Sabbath Sentinel should also help non-Sabbath keepers realize that the historical evidence points to early, faithful, Christians resting on Saturday and not Sunday.

Late last year, The Sabbath Sentinel published another article I wrote titled Feast of Tabernacles–Glimpse the World Under Christ’s Reign.

Please pray that we may find an acceptable and reasonably priced location to hold services those two dates. The first facility we contacted in Stuart apparently was not interested, and we have since tried another place there. We are looking for something on the eastern side of that state, probably near West Palm Beach or Boca Raton. If you are in Florida and may wish to attend, please email me: cogwriter@aol.com

We continue to see the rise of more governmental monitoring of the internet. Over in Germany, they are looking at passing another law to get social media companies, like Twitter and Facebook, to provide more detailed reports on activities that the Germany government wants monitored (see Germany to force social media companies to report to ‘Big Brother’). Canada and France have considered adding further restrictions on speech (see Canada looking at restricting speech, France looking at restricting anti-abortion positions on the internet). A ‘famine of the word’ (cf. Amos 8:11-12) is coming and we should expect that internet censorship and monitoring will be factors in this.

The Chinese and Europeans remain concerned about trade because of Donald Trump (see China and Europe concerned about Donald Trump and a possible trade war). The Bible tells of a massive trading power arising in Europe (cf. Revelation 18) and we are seeing Europe pushing for more trade. Some in Europe are also pushing for more nuclear and other weapons (see EU pleased with Dutch vote, while Queen Elizabeth II assents to Brexit. Is Europe looking to go nuclear?).

Over in the United Kingdom, its Parliament approved the Brexit and Queen Elizabeth II gave her royal assent, so the UK now legally can inform the European Union that it intends to leave it (see ‘Parliament passes Brexit bill and opens way to triggering article 50′ and EU pleased with Dutch vote, while Queen Elizabeth II assents to Brexit. Is Europe looking to go nuclear?). Various Church of God writers have said this would happen over the decades and we are seeing it now come to pass. It should be added that the idea that the UK will be taken over by the European Beast power will also come to pass (cf. Daniel 8:24-25; 11:39)–though not during the first term of the Donald Trump Administration.

IN CASE YOU DO NOT RECEIVE A ‘LETTER TO THE BRETHREN’ FOR ANY WEEK, REMEMBER THAT THERE ARE MANY SERMON MESSAGES ON THE ContinuingCOG channel AND MANY SERMONETTE MESSAGES ON THE BibleNewsProphecy channel. There are also some messages at the CCOGAfrica channel.

Notice the following from the Book of Proverbs:

17 Incline your ear and hear the words of the wise,
And apply your heart to my knowledge;
18 For it is a pleasant thing if you keep them within you;
Let them all be fixed upon your lips,
19 So that your trust may be in the Lord;
I have instructed you today, even you.
20 Have I not written to you excellent things
Of counsels and knowledge,
21 That I may make you know the certainty of the words of truth,
That you may answer words of truth
To those who send to you? (Proverbs 22:17-21)

Brethren, do you understand the certainty of the words of truth? Trust God, not like the world claims to, but like Jesus did.