Greetings again from the West Coast of the USA.

Today is observed in the USA to mark its official Declaration of Independence 243 years ago.

Since then, although the economy of the USA has held up, many things have worsened.

The USA now has less freedom of speech and less freedom of religion. But instead of the government doing most the direct censoring, much of the news media and the big tech internet companies do that. And much more than would have been imagined in 1776.

The fact that the government cannot seem to define a male vs. female is also a development that would not have been imagined in 1776.

That being said, the CCOG has still been able to function with its USA office, despite us taking steps related to censorship (like not making live certain videos on Vimeo–but that we do still make live on the YouTube and Brighteon platforms). But the time will come when the ‘famine of the word’ (Amos 8:11-12) will hit.

Even in what has been called “the land of the free.”

Speaking of ‘independence,’ Canada celebrated its 152 anniversary this week–but, it too, has censorship issues, some worse than the USA (see also Canada observes its 152 ‘birthday,’ but has moved far from some of its foundational principles).

Bibles to Mozambique and Food to Malawi

Malawi-based deacon Radson Mulozowa visited Mozambique and provided some Chichewa-language Bibles. He was able to distribute some in Malawi before, but finally got to do so in Mozambique. Most of our members in Malawi and Mozambique speak Chichewa.

The attached is the picture of brother MATIYA receiving the Bible on behalf of the the brethren: 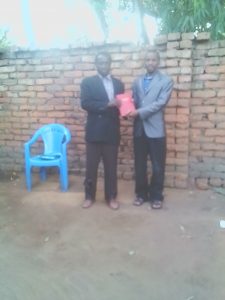 Wedson Matiya is our host in Mozambique.

After that visit, we also needed to send Radson Mulozowa some funds so that he can get maize since thieves harvested all the maize and sunflower in his garden and that took away his family’s food.

We now have another animation available:

Is God Calling You?

Is God calling you? Christians have always been a minority on this earth. Is there a great battle between God and Satan that God is losing? Is the calling a great treasure or ‘pearl of great price’? What did Jesus teach? If God is calling you, what is your purpose? Are Christians to reign with Christ? Should you support the proclamation of the gospel of the Kingdom of God? Will you have a role to make eternity better? This animation provides scriptures and other information to answer these and other questions.

It is the recommended sermonette for this coming Sabbath.

In the 21st century, animations are one way to do that.

But let it be understood that while the use of animations is mainly focused on people from age 13 to 30, animations are watchable by people of almost all ages.

We are pleased to have another one available.

The US presidential campaign is basically in full swing with the two Democratic party debates last week (see ‘Winners and losers from the 1st 2020 Democratic debate’ and Trump declares 2020 election is over, whereas the Democrats see it differently). Whoever wins, Republican or Democrat or ? in 2020 will be apocalyptic. We are getting closer to the end of the 6,000 years God has given humanity to rule itself and whoever is the US President will take steps that will lead to the Great Tribulation (Daniel 11:39; Matthew 24:21). As Jesus taught, pray for God’s Kingdom to come (Matthew 6:10).

The group calling itself the Islamic State issued various threats against the UK and USA–with some thinking that they may try to hit the USA today (see ‘YOU WILL BURN’ Sick ISIS supporters threaten to bomb London and New York: 4th of July?). Whether or not from people claiming to be supporters of ISIS, more terrorism will hit the USA and its Anglo-Saxon-Celtic descended allies (Leviticus 26:14-17; Deuteronomy 32:25; Ezekiel 21:12).

Back in 2008, I wrote that the Europeans would move closer to Latin America and further away from the USA on trade, plus someday strike significant deals with at least most of Latin America. Last Friday, a major deal with parts of Latin America was announced (see EU’s Juncker essentially verified accuracy of 2008 COGwriter prediction on trade).

Then on Monday of this week, the Trump Administration proposed more tariffs and against Europe, and yesterday UK members of the European Parliament turned their backs when the EU Anthem was played at the parliament building (see Brexit MEPs turn back on EU anthem, EU stymied on leadership, and more tariffs from the Trump Administration). The Europeans are getting more upset with the UK and USA. (see EU announces a modified Instex: The Swift end of US dollar dominance). Consistent with biblical prophecies, what we have been warning related to trade and the UK’s and USA’s relationships to Europe are coming to pass.

Furthermore, yesterday the EU Parliament announced its nominees for several top positions. German Defense Minister Ursula von der Leyen was proposed to be the next European Commission President to replace Jean-Claude Juncker (see 2 men and 2 women tapped for top EU roles: COGwriter expects EU Commission President nominee Ursula von der Leyen to push for EU Army). CNN reported, “One of Leyen’s only publicly-known European policies is her support of a European army” (https://www.cnn.com/2019/07/03/europe/eu-leyen-lagarde-deal-intl/index.html). She is also known for advocating a military that can function independent of the USA. Europe is prophesied to have “a great army” (Daniel 11:25) and one day defeat the USA militarily (cf. Daniel 11:39). This will happen whether of not Ursula von der Leyen becomes the next European Commission President (some oppose her nomination in Europe). But her nomination helps show that many in the EU leadership really do want a European army that can function independently of the USA, despite denials that we sometimes read about.

Over in the Far East, Indonesia and China are trying to get more of China’s ‘Silk Road’ project in place (see ‘Indonesia asks China for special fund under Belt and Road,’ another step towards Armageddon?). This is consistent with something I wrote back in 2011, as well as consistent with the prophesied confederation of a 200 million man army (Revelation 9:13-18) as well as Armageddon (Revelation 16:12-16).

19 “Do not lay up for yourselves treasures on earth, where moth and rust destroy and where thieves break in and steal; 20 but lay up for yourselves treasures in heaven, where neither moth nor rust destroys and where thieves do not break in and steal. 21 For where your treasure is, there your heart will be also. (Matthew 6:19-21)

Brethren, while what we see on the earth affects us greatly, let’s not forget to keep our eyes on the higher calling. Matthew 24:14 and 28:19-20 are being worked on and will be fulfilled to God’s satisfaction and then, shortly thereafter, Jesus will return.