Another week of working on literature, domestic, and international matters.

A coworker in Illinois had to delay his visit to a couple of hotels in the Aurora/Naperville region of Illinois that I asked him to see. He expects to go soon and send in a report about the locations next week. Once we have that, those who wish to attend the Feast of Tabernacles with us in the USA this year should be able to make more definite plans.

At this moment we are fairly confident that we will be meeting at one of the hotels in the Aurora/Naperville region of Illinois. This region is about a half-hour south of Chicago.

In response to the needs for food in Mozambique and Malawi that Sosten Libungwa and Pastor Evans Ochieng conveyed to us, we were able to send some funds there that should arrive soon.

Also it should be mentioned that, since according to Pastor Ochieng it looks like their crops are doing well this year, hopefully we will not need to do this again.  But it is nice that we were able to send help when they had a real need.

Pastor Ochieng sent some photos of the people and a baptism: 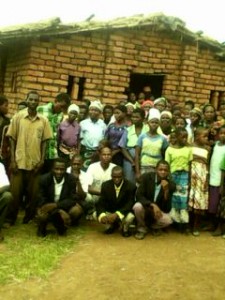 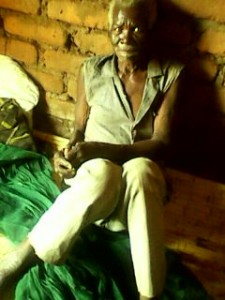 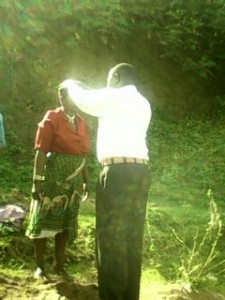 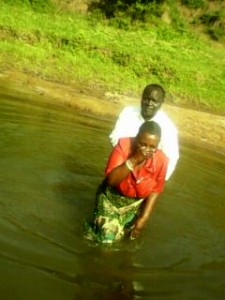 Pastor Ochieng returned back to Kenya from Malawi several days ago.

Sharon Recho (Rachael) emailed me and informed me that the CCOG building in Nigeria is completed.

We did provide substantial financial support for the construction of this building.

Some in various parts of Africa have asked for support for church buildings in their areas which we have repeatedly refused.

Is it because we love them less than those in Nigeria?

It is 1) because we do not have available funds for most building requests and 2) we were forced to support Nigeria because in Nigeria churches are required to own at least one building or the government will shut them down.

It really stretched our finances to have to help with the Nigerian building project and we still have not fully recovered our fund situation.

So, we do not expect to be able to provide funding for most building needs.

Perhaps I should mention that the Continuing Church of God does NOT have any buildings that it owns in the USA or Canada. Also, we (other than the Feast of Tabernacles) almost never pay for rental space for services in the USA.

Our main office is in a building that I personally rent, and the Continuing Church of God is not paying for it.

Anyway, we are glad that we think we fulfilled the legal needs to operate in Nigeria. But if you are meeting in Africa, please understand that we simply do not have the funds to support the meeting needs many have. That will mainly need to come from the tithes and offerings of those who attend there.

Political matters in the UK and USA have dominated the news lately.

This ‘special status’ is causing those in east and west Europe to harbor resentment against the UK. Although the deal was intended to increase the affinity of those in the UK towards the EU, it is not clear that happened. But it has caused a split in the Prime Minister’s party, with the mayor of London now publicly in favor of getting the UK to leave the EU (see London’s Boris Johnson wants a Brexit!). Groups, like the Church of Scotland, want the UK to stay in the EU (seeChurch of Scotland wants UK to remain in EU). Yet, let me make this plain, no matter what happens in the vote, the time will come when Europe will overpower the UK and the UK will be no more.

We might be witnessing a presidential contest in the USA this November between two of the least biblically moral candidates to ever make it that far in the process.  This does not bode well for the USA (cf. Proverbs 29:2).

In terms of international politics, a ‘cease fire’ was partially agreed to in Syria (see Syria agrees to stop fighting, but . . .). Irrespective for how that plan will or will not work, the Bile tells of a time when Syria’s capital Damascus will be destroyed (Isaiah 17:1).  This will happen and no peace deal will prevent it.

In other international news, the Chinese seem to be fortifying their position in the South China Sea, while Australia announced it will increase its defense spending (see China moves fighter jets back to South China Sea island; what about Australia and New Zealand?). While increasing defense spending may make carnal sense, the reality is that Australia will NOT be able to adequately protect itself from an all out war with China or Europe. Australia will one day be taken over.

14 Blessed are those who do His commandments, that they may have the right to the tree of life, and may enter through the gates into the city. 15 But outside are dogs and sorcerers and sexually immoral and murderers and idolaters, and whoever loves and practices a lie. (Revelation 22:14-15)

Brethren, believe the truth and live the truth, with godly confidence.