Greetings again from our office in Grover Beach, California.

We hope and pray you had a spiritually productive week.

In order to reduce risk from governmental authorities, the last video I recorded is not “official,” no CCOG funds were spent to produce it, it contains my personal opinions, and it does not have the Bible News Prophecy start or end screens on it. But it is hoped to be of interest. In a future sermon, I hope to discuss matters like why I did this.

Radio
As mentioned two weeks ago, I was scheduled to be on the Republic Broadcasting Network(RBN) at 2:00 pm Central Daylight Time last Thursday. But that did not happen because of something on their end. However, I ended up being on yesterday at that same time. The host and I discussed issues such as the plans that the Islamic State has, their misunderstanding of scriptures related to Jesus, as well as biblical prophecies related to terrorism and the final King of the South (Daniel 11:40-43)

A couple of weeks ago, I noticed that one of the sermon or sermonette videos seemed a little dark.  I had seen this on occasion in the past, so decided to look for better lights.

So, we got new lights for for this.  Here is what they look like:

Their poles can extend to around 7 1/2 feet (over 2 meters) high. Yet, these lights were not expensive.

Having more light should improve the visual quality of our videos. One concern is whether or not humming from the lights will affect the sound, so we will monitor this.

My wife Joyce and I are not audio-visual professionals, and we appreciate that most of our viewers do not seem to mind this.

However, some do, and it is hoped that the lighting change will make the videos easier to watch for everyone.

Google reported that our campaign with them reached 3,452,420 computers last month. When this is combined with what cogwriter.com and the CCOG websites have reached, this means nearly 4,000,000 computers received information about the truth in July of 2016. This is down a little from last month, but historically there is a drop in internet traffic in July of each year, so that is not a surprise.

But it is still great that millions have an opportunity to be exposed to the truth each month.

Deaths and More in Africa

Shortly after sending out last week’s Letter to the Brethren, Pastor Evans Ochieng reported the following:

Pastor Dr Bob,
Sorry pastor of staying for long without any responses from me. I was more than busy. We had more problems in Kenya these 2 weeks.

My wife Rose’s father died, Samson Obonyo of Eberege congregation also died. I was making burial arrangements and mortuary bills for the 2.I was also trying to meet most of the people who are contacting us before I move to Tanzania and Malawi. I came back home this evening. We shall travel to Kisii tomorrow morning to bury Samson Obonyo. My father in law Joseph Oduka will be buried on 21 August 2016.

On Monday I will travel to Nairobi to book my ticket to Malawi and Mozambique. The situation was too busy with me that I could not make it earlier. After booking I will go to Tanzania before I fly out to Malawi.

He also sent me the following later:

We buried Samson Obonyo on Friday. The burial was very good. There was something very interested that took place that day. After preaching at the funeral, 6 SDA members decided to join CCOG. 4 of them were from Samson Obonyo’s family. And two of them were from outside that family. When some SDA members saw this, they decided to walk away in a bad mood. So let us join together to pray for them. Immediately after burial I went and sleep at border so that I could manage to catch time in Tanzania. Since the time is very short this month concerning my programs I decided to go to Tanzania first and complete the visitation in Tanzania and to start the plastering of the camp site. I met Martin Wanga. I rushed in Tanzania because there was an urgent need to meet some of the brethren whom I didn’t meet before. So I was to meet them before I go to Malawi. Koang from Ethiopia told me to meet him in September because he was still in university. And he will be at Gambella in September. I just come back today and tomorrow I am planning to go to Nairobi to book the ticket to Malawi and come back on Friday to prepare for burial of my father in law (Joseph Oduka) which will take place on Sunday.

Pastor Evans Ochieng is overwhelmingly busy and he and his wife need your prayers, as do those in Kisii.

Please pray for more laborers for the harvest (Luke 10:2-3) and pray for us (1 Thessalonians 5:25) that he and I will properly be able to identify some of those laborers (cf. 2 Thessalonians 3:1-3).

On other African matters, I had a couple of conversations and emails from people from Ghana. As mentioned before, the Ghanians are edging closer to CCOG, but are not officially part of CCOG, and we will see how many congregations are truly part of us in time. Pastor Evans Ochieng plans to go to Ghana and discuss this and other matters next month. 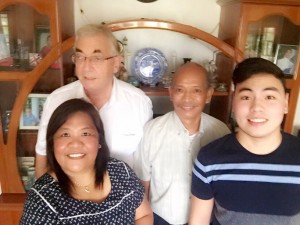 We had had growth in the Philippines in the past two years and I believe that we will see much more growth there in the future.

Encouragement from the ‘Land Down Under’

We received the following from someone in Australia:

Since I first began reading articles in February and then listening to sermons my understanding has sky-rocketed and the Bible has come to life! I can not wait for the day we are baptised into God’s Church, though I do not know when that will occur. The strange thing is that I feel as though the Holy Spirit has already come upon me due to the way my eyes have been opened and the understanding I have been granted! I can spend hours explaining parts of the Bible to my wife and mother-in-law that I have learned from you because it seems to just sink in and make sense!

While we have no congregations currently in Australia, there are a couple of scattered ones around there that are interested in, and supportive of, the truth.

US politics, and specifically Donald Trump, continue to dominate much of the news. In Germany, more and more leaders have publicly made statements against Donald Trump (seeGerman leaders oppose Donald Trump and seemingly prefer Hillary Clinton)–so much so, this type of German commentary related to a US presidential candidate seems to be unprecedented. Whether or not he gets elected as the next President of the United States, the fact that he has made it this far has upset the Europeans in general, and the Germans in particular. Germany has proposed increasing its troop size as well as including non-German Europeans in its armed forces (see Bundeswehr wants EU nationals to be soldiers).  More military steps will be taken in Europe and this will not end well for the USA (cf. Isaiah 10:5-11; Daniel 11:39).

The news in the USA also included massive flooding in Louisiana (see Deadly flooding and evacuations in Louisiana), civil unrest in Wisconsin, fires in California, and a protest of a Satanic ceremony in Oklahoma. Jesus spoke of a time of “troubles’ (Mark 13:8) and we seem to be, at least partially, in that time.

There has been some ‘sabre-rattling’ in Russia regarding a claim of a Ukranian-supported incursion into Crimea (see Situation heating up between Russia and Ukraine over Crimea and‘Putin deploys Russia’s most advanced air-defence missiles in Crimea as alarm grows war is imminent’ but . . .). We continue to hear of ‘wars and rumors of wars’ as Jesus predicted (Matthew 24:6).

Over in Scotland, it has been reported that police have seen a ‘poltergeist’ (see Signs and lying wonders: Police witness ‘poltergeist’)–essentially something done by a demonic spirit. The Bible warns of dramatic signs and lying wonders in the end times (2 Thessalonians 2:8-12; Revelation 13:7-14). Having ‘verified’ paranormal activity will condition people to accept as real, improper manifestations from the demonic world in the future.

Although I have quoted this before, I would like to end with something that the Apostle John wrote:

2 Beloved, I pray that you may prosper in all things and be in health, just as your soul prospers. 3 For I rejoiced greatly when brethren came and testified of the truth that is in you, just as you walk in the truth. 4 I have no greater joy than to hear that my children walk in truth. (3 John 2-4)

Brethren, we are continuing on working on bringing more of the truth to you (Matthew 28:19-20) as well as to get the gospel of the kingdom to the world as a witness (Matthew 24:14).