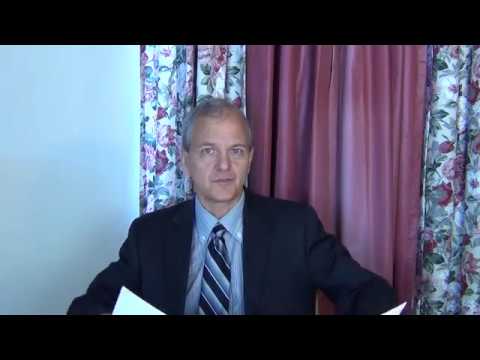 Various churches claim to have something termed ‘apostolic succession.’ Does any church have this? Where does the concept teach? Is there biblical support for apostolic succession? Is the doctrine of the laying on of hands related? Did the gospel wtier Mark found the Alexandrian Orthodox Church? How long could the Church of God in Antioch have held true succession? Did succession cease in Jerusalem in 135 A.D.? What about Constantinople? Was their apostolic succession in Asia Minor until about 250 A.D.? What about Rome? What do Catholic scholars really understand about early claims of succession? Of the two churches that Irenaeus and Tertullian claim had succession from the apostles, which was faithful to the teachings of the Bible and the apostles? Is there still such a church today? Why is any of this important to Christians in the end times? Dr. Thiel answers these questions and more from the Bible and historical writings.

Here is a link to the video sermon: Claims of Apostolic Succession.

Apostolic Succession What really happened? Did structure and beliefs change? Are many of the widely-held current understandings of this even possible? Did you know that Catholic scholars really do not believe that several of the claimed “apostolic sees” of the Orthodox have apostolic succession–despite the fact that the current pontiff himself seems to wish to ignore this view? Is there actually a true church that has ties to any of the apostles that is not part of the Catholic or Orthodox churches? Read this article if you truly are interested in the truth on this matter!  Here is a link to a related sermon: Claims of Apostolic Succession. Here is a version of the article in the Spanish language La sucesión apostólica. ¿Ocurrió en Roma, Alejandría, Constantinopla, Antioquía, Jerusalén o Asia Menor?
Early Church History: Who Were the Two Major Groups that Professed Christ in the Second and Third Centuries? Did you know that many in the second and third centuries felt that there were two major, and separate, professing Christian groups in the second century, but that those in the majority churches tend to now blend the groups together and claim “saints” from both? “Saints” that condemn some of their current beliefs. Who are the two groups? A related sermon is also available Christianity: Two groups.
Hope of Salvation: How the Continuing Church of God differs from most Protestants How the real Church of God differs from mainstream/traditional Protestants, is perhaps the question I am asked most by those without a Church of God background. As far as some changes affecting Protestantism, watch the video Charismatic Kenneth Copeland and Anglican Tony Palmer: Protestants Beware! [Português: Esperança do salvação: Como a igreja do deus difere da maioria de protestantes] Here is a link to the video sermon: How Does the Church of God Differ from Protestantism?
What Was the Original Apostles’ Creed? What is the Nicene Creed? Did the original apostles write a creed? When was the first creed written? Are the creeds commonly used by the Eastern Orthodox or Roman Catholics original?
Do You Practice Mithraism? Many practices and doctrines that mainstream so-called Christian groups have are the same or similar to those of the sun-god Mithras. December 25th was celebrated as his birthday. Do you follow Mithraism combined with the Bible or original Christianity? A sermon video from Vatican City is titled Church of Rome, Mithras, and Isis?
Where is the True Christian Church Today? This free online pdf booklet answers that question and includes 18 proofs, clues, and signs to identify the true vs. false Christian church. Plus 7 proofs, clues, and signs to help identify Laodicean churches. A related sermon is also available: Where is the True Christian Church? Here is a link to the booklet in the Spanish language: ¿Dónde está la verdadera Iglesia cristiana de hoy? Here is a link in the German language: WO IST DIE WAHRE CHRISTLICHE KIRCHE HEUTE? Here is a link in the French language: Où est la vraie Église Chrétienne aujourd’hui?
Continuing History of the Church of God This pdf booklet is a historical overview of the true Church of God and some of its main opponents from Acts 2 to the 21st century. Related sermon links include Continuing History of the Church of God: c. 31 to c. 300 A.D. and Continuing History of the Church of God: 4th-16th Centuries and Continuing History of the Church of God: 17th-20th Centuries. The booklet is available in Spanish: Continuación de la Historia de la Iglesia de Dios, German: Kontinuierliche Geschichte der Kirche Gottes, and Ekegusii Omogano Bw’ekanisa Ya Nyasae Egendererete.
CCOG.ORG Continuing Church of God The group striving to be most faithful amongst all real Christian groups to the word of God. To see how CCOG has done so far, here are links to two sermons Continuing Church of God (CCOG) first year anniversary: What has been accomplished? and The Continuing Church of God: Two Years of Proclamation. Here is a written link to a version of that sermon in the Spanish language: Aniversario del primer año de la Continuación de la Iglesia de Dios: ¿Qué se ha cumplido?
Congregations of the Continuing Church of God This is a listing of congregations and groups of the Continuing Church of God around the world.
CCOG.ASIA We in the Continuing Church of God also have the url www.ccog.asia which has a focus on Asia and has various articles in Mandarin Chinese as well as some in English, plus some items in other Asian languages. 我们在继续神的教会也提供此网址 www.ccog.asia, 关注于亚洲并且有各种各样的中英文文章，其中一些用菲律宾语翻译的文章也正在进行中，准备添加到这个网站中。 Here is a link to our Statement of Beliefs in Mandarin Chinese 继续神的教会的信仰声明.
CCOG.IN This is a website targeted towards those of Indian heritage. It has a link to an edited Hindi translation of The Mystery of the Ages and is expected to have more non-English language materials in the future.
CCOG.EU This is a website targeted toward Europe. It has materials in more than one language (currently it has English, Dutch, and Serbian, with links also to Spanish) and it is intended to have additional language materials added.
CCOG.NZ This is a website targeted towards New Zealand and others with a British-descended background.
CCOGAFRICA.ORG This is a website targeted towards those in Africa.
CCOGCANADA.CA This is a website targeted towards those in Canada.
CDLIDD.ES La Continuación de la Iglesia de Dios. This is the Spanish language website for the Continuing Church of God.
PNIND.PH Patuloy na Iglesya ng Diyos. This is the Philippines website Continuing Church of God. It has information in English and Tagalog.
CCOGAfrica channel. This has messages from African pastors in African languages such as Kalenjin, Kiswahili, Embu, and Dholuo.
Bible News Prophecy online radio. This is an audio version of the Bible News Prophecy videos as well as some ContinuingCOG channel sermons. It is also available as a mobile app.
ContinuingCOG channel. Dr. Thiel has produced scores of YouTube video sermons for this channel. Note: Since these are sermon-length, they can take a little longer to load than other YouTube videos.